The uncertainty that plagued grainfed cattle markets in March and April has dissipated as tight supply of finished cattle in general saw a rapid improvement in May. Grainfed cattle are currently marginally off record highs, but lotfeeders aren’t enjoying it too much as expensive feeders keep margins in check.

Two aspects of the lotfeeding equation have moved in favor of feeders this winter, with close to record grainfed cattle prices, and declining costs of grain.  However, the abundance of feed in NSW and the lack of stock has seen restockers competing strongly with feeders, and the price of feeder cattle remains very strong.

Figure 1 shows that after falling heavily due to uncertainty and a bit of panic selling in March and April the 100 Day Grainfed Steer Over the Hooks indicator rebounded strongly in May.  Tight supply of finished cattle has overridden export market uncertainty to date, and is holding the Grainfed Steer indicator at 650¢/kg cwt.

We can also see in figure 1 that after a brief dip, input costs for feeders also increased, largely due to higher feeder cattle costs.  Feeder steer prices are also close to record levels, with MLA reporting Short Fed feeders at 392¢/kg lwt and Medium Fed feeders at 410¢.  It’s not unusual for feeder prices to peak at this time of year, and it is common for them to ease in the spring.

Grain prices have fallen during the Covid-19 crisis, with feed wheat on the Darling Downs having lost $100/t, to slip under $400/t for the first time since last November.  In the south the magnitude of the fall has been similar, but things are better for lotfeeders, with feed wheat now just under $300/t.  Barley is even cheaper, coming in at around $240/t.

With 100 day steers eating around 1.5t of feed to reach their target weights, they are obviously saving around $150 per head on feed, compared to earlier in the year.  Much of this saving is being given back in the form of feeder prices however.

Figure 2 shows lotfeeding margins have improved compared to the dire position of three months ago.  In the north, cheaper feeders sees margins at a relatively healthy level, but they haven’t been there long.  While in the south gross margins are around break-even, and negative once overheads are taken into account.

There is the prospect of falling finished cattle prices, as more cattle come off grass, which could tighten margins, and see feeder values fall.  Falling grain prices are always helpful for feeder cattle prices, and with new crop grain even cheaper, it might take some of the sting out of traditional spring young cattle price decline.

With margins still relatively tight, as are young cattle supplies, it’s unlikely we’ll see a rise in the numbers of cattle on feed this quarter. 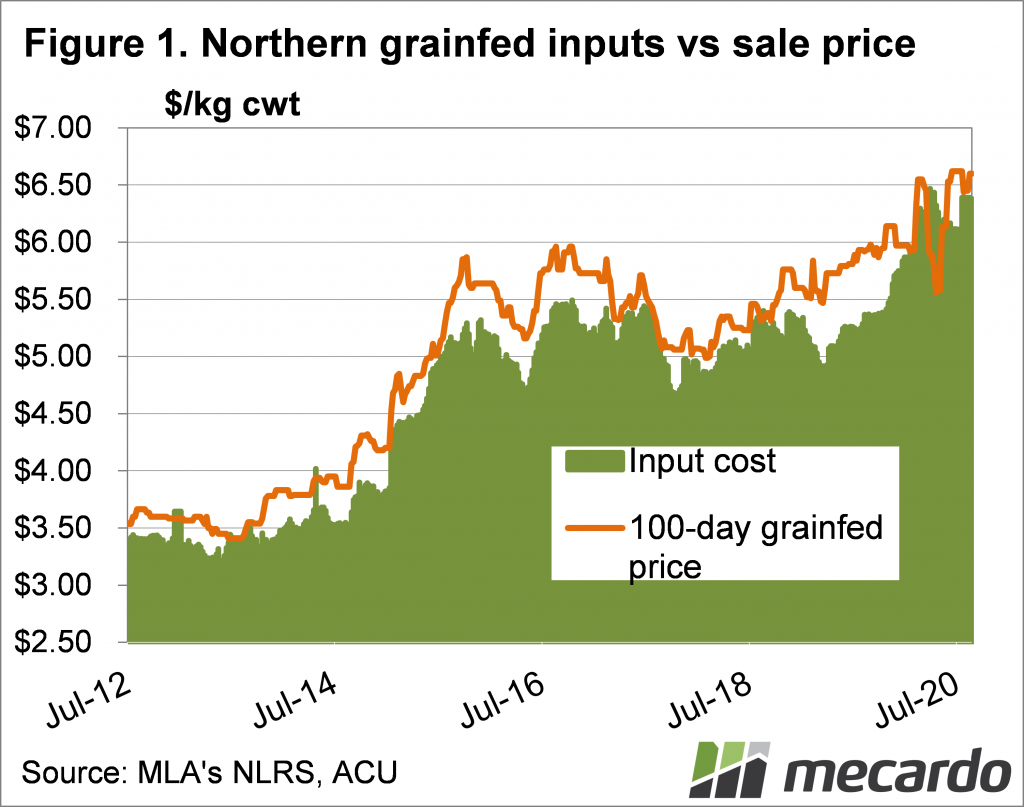