It was raining heavily up and down the east coast on Monday, and the timing was pretty good for most grain growers, with much of the harvest in the bin. It has been a bumper harvest, which depressed prices for a while, but after trending down for much of the last three months, prices are showing signs of recovery.

There is still some grain to come in southern parts of Victoria, but it will take a week or two after this rain.  Last year GrainCorp received 3.4mmt.  Victoria hasn’t quite surpassed total receivals from 19-20 yet, but we might get there yet.

With the slowing of the harvests, wheat prices have improved, with some assistance from the international market.  On the 8th and 9th of December ASX East Coast Wheat was at $273/t and at a spread to Chicago Soft Red Wheat (SRW) of -$10.  The $20 gain on the ASX over less than two weeks has been driven by both increasing international prices, and a stronger basis (figure 2).

With a close to record harvest, wheat needs to stay at low levels relative to international values to keep finding a home in export destinations.

Barley prices haven’t managed to rally in line with wheat, with export issues keeping a lid on demand.  Figure 3 shows barley is well below last year’s levels, and now at a $70 discount to wheat which is likely to see further shifts in feed consumption.

Canola prices have also rallied over the last week on the back of slowing harvest and increased international values.  After falling steadily but slowly since mid-November, Canola gained $10 late last week to sit in the $580-590/t port range on Monday.

The slowing harvest will always support prices, and it helps moving into Christmas when growers put grain marketing on the backburner.  With harvest cash flows likely secure, many will sit on grain waiting for higher prices.  The key is to keep track of basis, as it is a more reliable indicator of selling opportunity than absolute price.

The next two weeks will be marked by volatility on international markets, as volumes are low and prices can move quickly.  It might also throw up some opportunities to grab some higher futures values, and leave basis to improve. 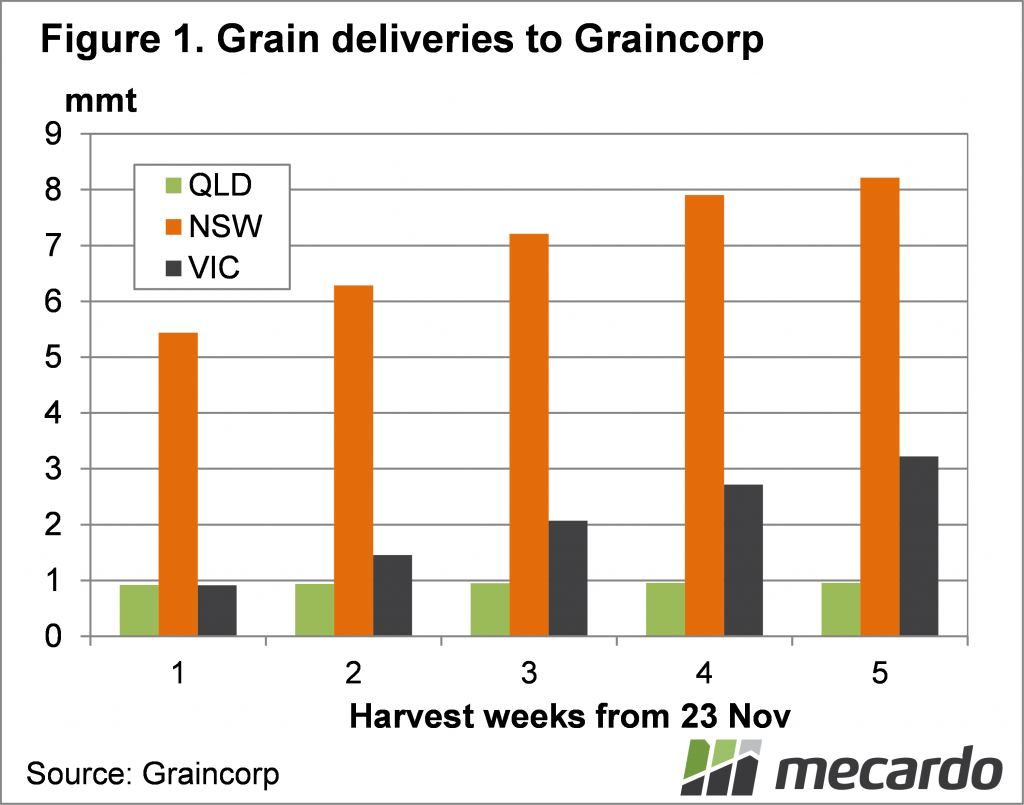