Records all round for Australian growers

The Australian Bureau of Agricultural and Resource Economics and Sciences (ABARES) released their post-harvest crop report earlier in March. Growers and handlers knew it was a record harvest, and while these aren’t official numbers, it looks like there will be records for the three main commodities.

While the wet weather during harvest in November and December slowed harvest, it definitely didn’t have too much impact on the amount of grain harvested.

Back in December ABARES predicted a record wheat crop was being harvested, but the March report further lifted production estimates.  The March Crop Report pegged Australian wheat production at 36.346 million tonnes, an increase of 6% on the December report, and 9% on 2020-21.  Figure 1 shows that 2020-21 was itself a record crop.

East Coast production wasn’t a record, despite a nearly 2 million tonne lift on the December estimate.  WA more than made up for the east coast, with production up 35% on last year, providing plenty of wheat for export.

In the last two years Australia has produced more than three years worth of wheat, if we work on the ten year average prior up to 2020.

Barley production estimates were also increased in the December report, with volumes creeping past 2016-17 into record territory.  Again it was the good year on the west coast which secured the record barley crop of 13.724 million tonnes.  Figure 2 shows that while the barley crop hasn’t eclipsed previous years as much as wheat, production was still very strong.

Canola had the largest year on year increase in production, with volumes up an extraordinary 40% on 2020-21.  Last year was also a record production year for canola, so the increase shown in figure 3 illustrates how strong production was last year.

Australia produced almost two average years worth of canola in 2021, almost half of it in WA.  Canola volumes were at record levels on both east and west coasts.

With the harvest well behind us now, and a lot of grain sold, and the happenings in world markets, production is all but forgotten about.  Still, local basis to international markets is weak on the back of the massive crops, but few are complaining about record yields and very strong prices.

The exceptional season is unlikely to be repeated, and we’ll have to wait until June to get an idea of how increased fertliser and diesel costs have impacted planting.  We suspect we won’t be seeing any volumes like these this year. 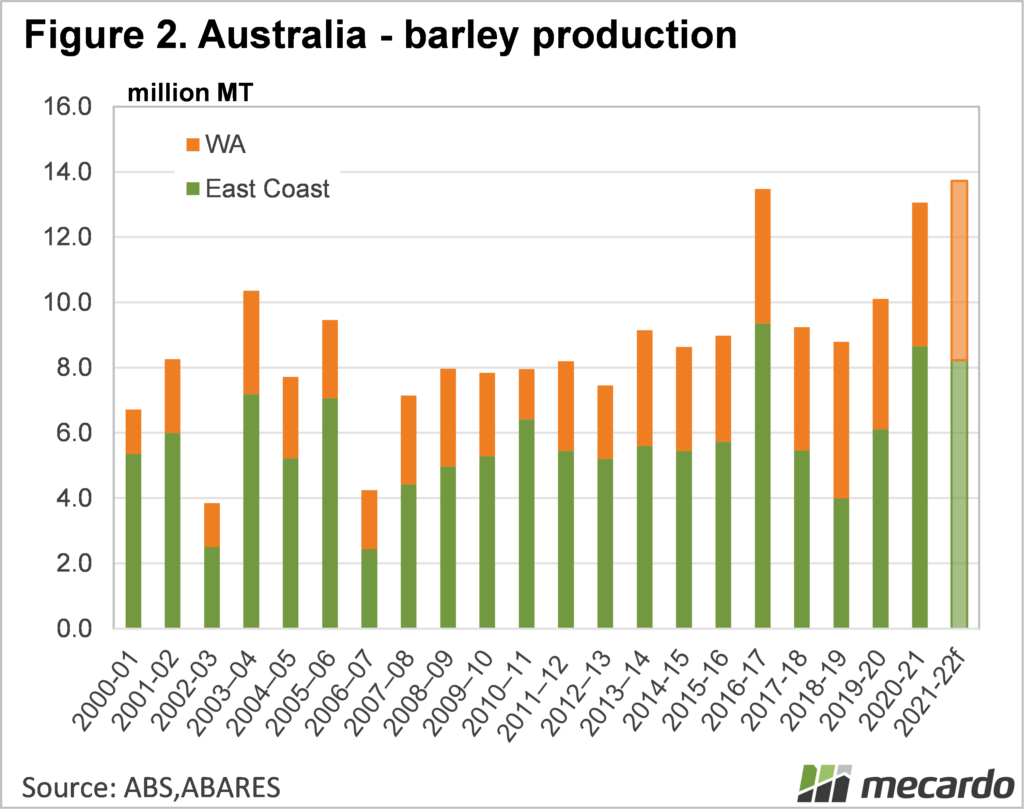