Beef and lamb both sold at record high levels for the first three months of 2021, but the price spread between the two staples grew to 22.5% a gap last seen in the March quarter of 2018. This was impacted by saleyard prices, as cattle returns also broke new ground from January-March, and lamb – while still historically high – was more than 100ȼ/kg below the record set in quarter one of 2020.

Retail beef prices lifted 4 per cent in January-March from the previous quarter, and 8 per cent from the same quarter in 2020, to 2387ȼ/kg. This is the third consecutive quarter a new record high retail beef price has been set, according to ABARES data, with the retail return rising every quarter except for one (being the June 2020 Covid-outbreak quarter) since June 2018. The National Trade Steer indicator for this year’s first quarter also achieved a record average price of 740ȼ/kg, keeping the spread between the two in check, at 222%. While this was 10% higher than the previous quarter, it was 38% lower than the previous March quarter.

After dipping in December 2020, the retail lamb price also hit a new high in the first quarter of 2021, to 1849ȼ/kg. The price lifted 3%  from December 2020, but the Eastern States Trade Lamb Indicator (ESTLI) – although still well below that record price – rose 8%, which saw the price divide between retail and saleyard contract to 122% (down 10%). The ESTLI averaged 831ȼ/kg for the quarter, down from 933ȼ/kg in the same period last year,

Meat & Livestock Australia reports the retail pork price also hit a record high in March 2020, however lamb remains 1.4 times dearer than pork, and 3 times the price of chicken. Chicken, while marginally higher in retail price for the March quarter at 567.78ȼ/kg, has risen less than 1% in price in the past two years. Lamb, on the other hand, is up over 6%, and beef has climbed more than 15%.

Domestic consumption remains the biggest market for both our beef and lamb industry, meaning retail prices on home soil do impact product demand. MLA says domestically fresh meat had the largest growth in retail value during the initial pandemic period. Reduced supply will keep pressure on both saleyard and retail prices for beef and lamb in the short-term, growing the price divide with other proteins and impacting domestic sales, but the record returns will recede as the herd and flock rebuild.

Recent research from Rabobank has shown March food service sales in Australia (and key export markets the US and China) were either on-par or above pre-Covid levels, recovering at a faster rate than many had expected, which will further support demand domestically and abroad. 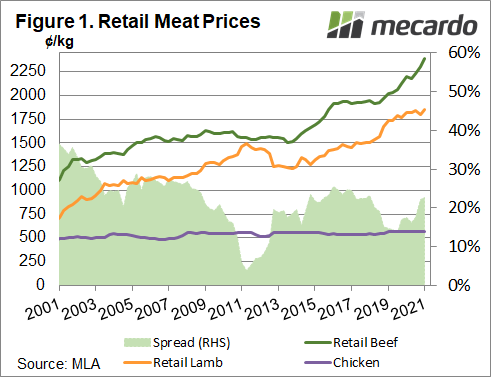 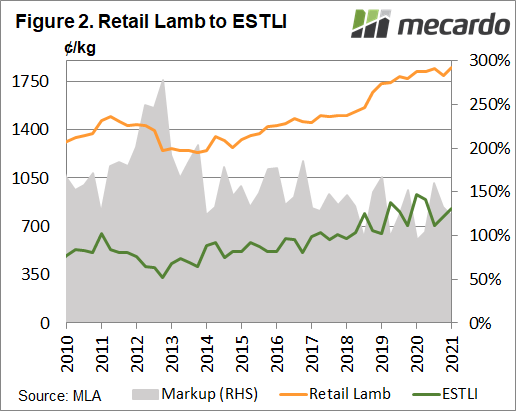 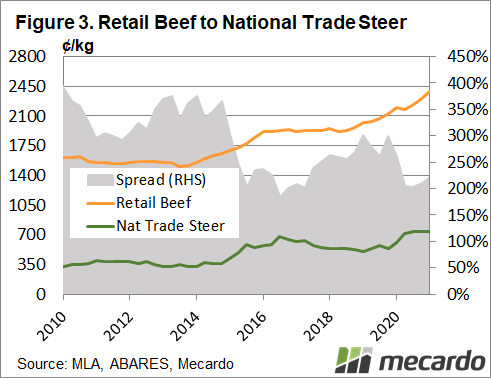