Red to the east, green to the west

Eastern lamb markets continued to ease this week, with even restockers pulling back. However, It was a different story in the West where fairly widespread rain provided a boost of confidence and prices for all categories of lamb and sheep strengthened.

East Coast lamb yardings responded to the slightly weaker prices of recent times by falling 5%. Throughput in Victoria and WA held steady but all other states saw a week-on-week decline.

Lamb slaughter numbers were slightly lower, dropping 2% to see 305,154 head processed for the week ending the 26th of January.

The Eastern States Trade Lamb Indicator lost 13¢ on the week to end at 835¢/kg cwt. In WA, trade lambs picked up an extra 14¢ to sit at 710¢/kg cwt. The trade lamb discount in WA to the ESTLI is currently at 17%, which is an improvement on the 28%  discount at this same time last year.

Light, Merino and Restocker lambs in WA came out on top this week, each gaining 65 to 90¢. In most eastern states these categories lost around 25 to 30¢ on the week.

The two week rainfall forecast by the BOM is looking very wet indeed. Nearly all of the country is looking at a 50% or greater chance of receiving above median rainfall. This (if it comes to fruition), along with the weaker eastern market, will likely put a halt on any substantial increase in supply. 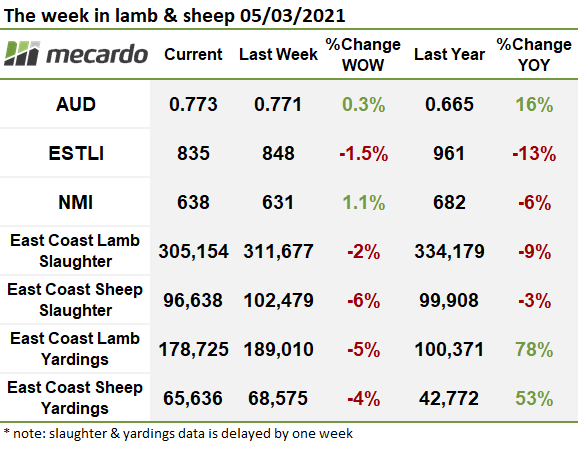 Market strength in the south

Both price and supply of lambs appear to have found some stability. Saleyard throughput has been tracking at close to average levels for the last

The shine has come off store sheep prices. After spending six months at historically extreme levels store lambs have eased in recent weeks, and some