Resistance found for sheep and lambs

Prices for most sheep and lamb categories took a turn south this week as resistance was found at recent levels. That was despite lower yardings; marking the entry into the tight winter for sheep and lamb supply.

Saleyard prices for most categories declined week on week. The Eastern States Trade Lamb Indicator (ESTLI) fell 2.4% to 914¢/kg cwt (Figure 1), but what was lost in the East was made up in the West. Trade lambs in Western Australia gained 2.3% to 804¢/kg cwt.

East coast restocker lambs didn’t get the support they’ve enjoyed of late, falling slightly to 961¢/kg cwt. It was light lambs that took the hardest hit though, losing 32 cents or 3.5%.

Last week saw fewer lambs and sheep running through eastern saleyards again. Lamb yardings were down 4%, and sheep yardings down 2% to see a combined 177,365 head yarded (Figure 2). Victoria drove much of the decline in lamb throughput, with nearly 10,000 fewer head yarded.

We’ve entered the official winter lull period for lamb and sheep supply and while there have already been weeks of very low slaughter, tight can get tighter. The Winter rainfall forecast has been changeable to say the least, switching again from average to above average rainfall for most sheep regions. Let’s hope the current forecast sticks. 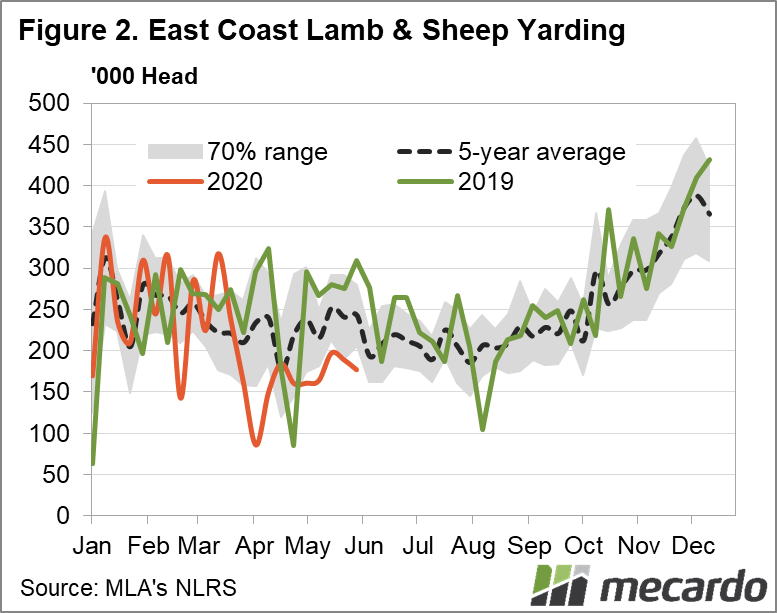 Get them light, hold them tight

Only a few weeks in and it’s been a busy January. Strong prices have got the saleyards pumping again, but processors have been a little

Victorian supply dragging in December and worse in January

January lamb and sheep slaughter has failed to rally in its usual fashion. Normally January sees a spike in both sheep and lamb slaughter as

Restocker lambs have opened the year as one of the hottest commodities, surging higher as producers, feeders and processors compete for whatever livestock they can

What a strong start to the new year for Sheepmeat! All categories of lamb and mutton set into 2021 much higher than where they left