With the Brisbane port returning to service and alleviating logistics constraints in QLD, slaughter surged higher last week, and with it, producer confidence, as cattle also returned to the yards in spades.

East Coast slaughter recovered strongly last week, rising 16% on the prior week to 89,801 head. The uplift was driven primarily by a 40% increase in throughput in QLD, with numbers slipping slightly in NSW and VIC. Although the kill rate is still 8% shy of where we were at the same time last year, it does appear that some of the flood-related logistics issues with workers, transport, and particularly cold storage capacity may have begun to resolve. Recent reports indicate that the port of Brisbane has largely fixed its flood related issues, and returned to service, operating at 80% capacity now, at 17 ships per day.

East coast yardings also charged ahead 37%, to 41,368 head, with QLD numbers surging over 125% to 21,311 head. This was helped along by a 23% pickup in VIC, all pointing towards a recovery of producer confidence in the markets.

The US frozen cow 90CL price was unchanged in US dollar terms at 305¢US/lb but in Aussie dollar terms, added 1¢ (<1%) to 920¢/kg swt, on the back of a slightly weakened Australian dollar. The latest Steiner report expresses concern that a US inflation rate of 8%, the highest in 40 years may weigh on domestic demand, particularly for foodservice, and that demand for lean beef in the US has taken a seasonal dip recently. The good news however is that domestic lean beef supply is expected to be tighter in April and May, which should support prices in the short term.

At this time of the year, both slaughter and yardings typically decline somewhat, however, given the disruptions in QLD recently, we may see a backlog of cattle continue to come out of the woodwork next week. Indications are that despite higher yardings, demand for young cattle is still solid, so prices are likely to remain relatively resilient in the coming weeks. 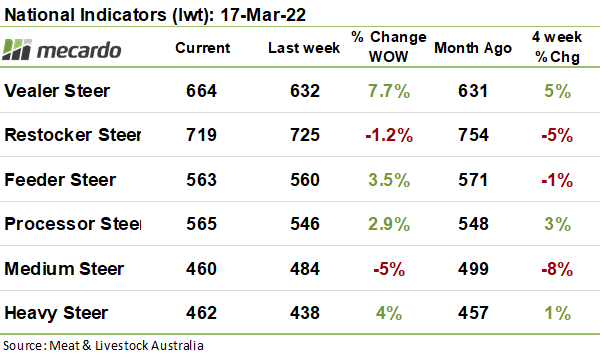 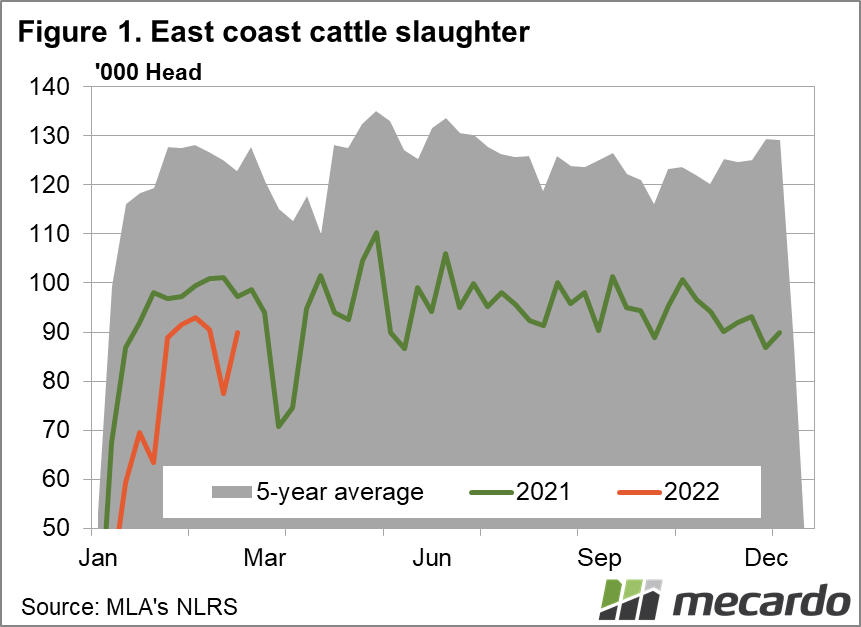