After several weeks of falls, the cattle market has stabilised somewhat, with the EYCI rising, restocker prices recovering and processor steers making some token gains - however, heavy steer prices have started heading into an abyss.

Yardings numbers for last week were a surprise given the solid price falls seen, with the number of cattle offered in freefall, down 29% compared to the prior week. The slowdown was coming out of QLD, where numbers dropped a massive 45% week on week, followed by NSW and Vic which respectively clocked in falls of 21%, and 7%.

Overall, yardings fell by 18,369 head compared to the week prior, with 44,409 cattle yarded on the east coast for the week ending 4th December, 34% below last year’s figures.

Slaughter picked up again, putting on an extra 5%, with the lions share of the increment coming from QLD, which saw almost a 5% increase in throughput, backed up by a 2% rise in VIC, and 1% in NSW.

Overall, a total of 115,048 cattle were processed on the east coast for the week ending the 4th December, 28% off the pace of last year.

On the categories, there’s two opposing stories to tell, with National restocker steer prices recovering strongly, but heavy steer prices booking a substantial fall. Interestingly, looking at the state based indicators, the restocker positivity appears to be emanating out of QLD and NSW, while in VIC, prices fell across the board, and the main downward pressure on heavy steers seems to be coming out of NSW, where prices are 8% that of QLD.

The Aussie dollar just keeps on rising, up another 1.5% this week, to reach 0.753US. The driver this week has been weakness in the US dollar stemming from concerning jobless claims statistics and continued political wrangling over the form of US stimulus packages. 90CL US frozen cow prices have showed strength, despite the rising dollar, putting on 2¢ (<1%) to end the week at 647¢/kg swt.

The rainfall outlook for next week is looking a lot more substantial, with southern and central QLD set to receive a very welcome 5-10mm and a solid band of 10-50mm extending from central NSW and VIC across to the coast. The massive drop in yardings seen last week was quite unusual for this time of year, and the number of cattle on offer on the east coast for this time of year has not been so low since around 2009, particularly in VIC and NSW. With some evidence of rainfall coming through to QLD now, and heightened prices this week, it looks doubtful that numbers on offer will increase next week. 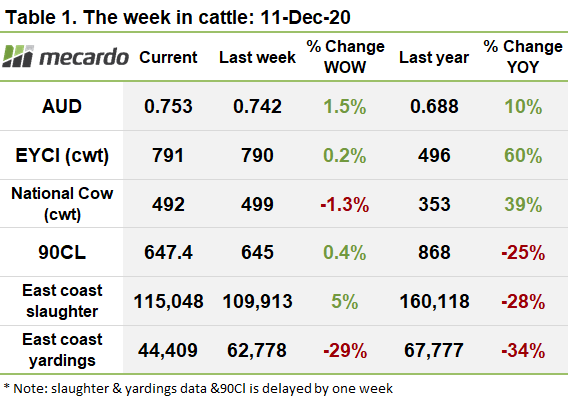 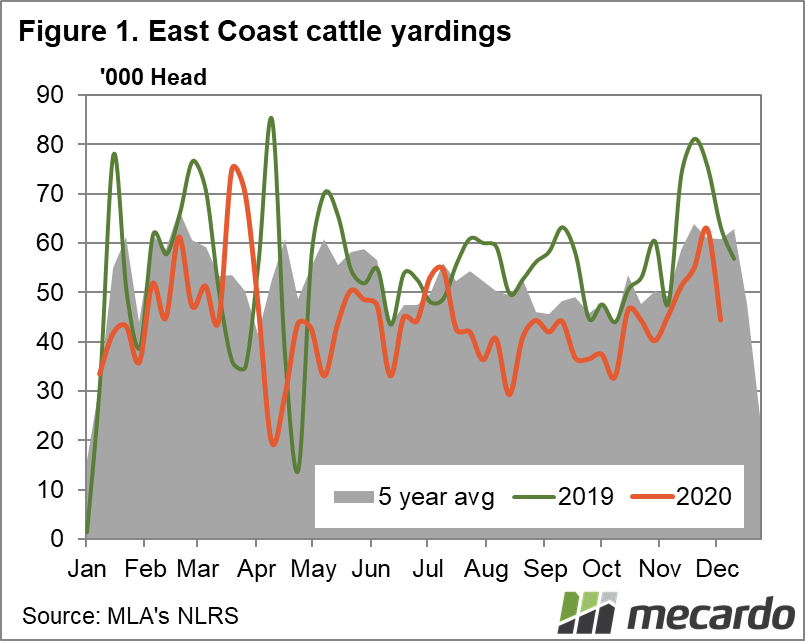