Lamb prices seem to be ignoring usual seasonal dynamics, proving demand isn’t wavering. Despite higher lamb yardings and slaughter in August compared to the same time last year, most indicator prices kicked higher, and none more so than the Restocker lamb indicator. Spring is shaping up nicely in many parts of the south, and with fodder reserves potentially refilled last year, many are on the market for more mouths to feed.

Nationally, the Restocker price averaged 1001¢/kg last week, up 31% year-on-year, and 29% on the five-year average. It reached a record daily high of 1030¢/kg at the end of August, breaking the 1000¢/kg barrier for the first time ever earlier that same month. We can see in figure 1 that while yarding numbers contracted at the start of the month, they remained higher both year-on-year and on the five-year average. And when throughput began to lift again, prices maintained their upwards momentum.

It is interesting to note that Meat and Livestock Australia is reporting that despite lamb yardings being up year-on-year since the start of August, a majority of this increase is due to old grown lambs still being sold (2020-drop), with new season lambs slower to hit the market. That said, Restocker lamb yardings were still up 6% on 2019 figures last week.

Leading the pack on price is NSW, with its Restocker lamb indicator closing at 1011¢/kg on Friday – nearly 134¢/kg higher than the same time last year. The NSW price peaked in the last week of August at 1078¢/kg, climbing from 810¢/kg in mid-June. Victoria, which only had half of NSW’s volume used in the indicator last week, and has a later young lamb season, has yet to break the 1000¢/kg mark, hitting 989¢/kg at the start of September. having been as low as 755¢/kg in June. It has since dropped back to 927¢/kg.

While Restocker prices have eased back below the $10/kg mark in opening reports this week, historically the trend shows us it is usually at least another month before any significant downward pressure is felt by the Restocker price. While supply usually picks up at this time of year, and producers might be prompted to sell lambs as stores because of high prices and concerns about kill space for finished lambs, demand will likely keep pace – especially if spring delivers more favourable conditions. 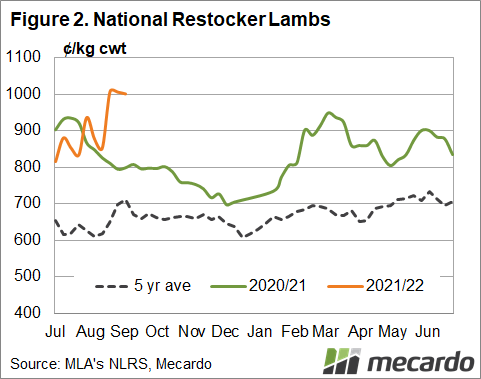 The spring flush of lambs in Victoria is picking up steam which added pressure to the lamb market. Mutton prices have bounced back after a