Slaughter fell again last week, but yardings picked up the pace in contrast, while the EYCI’s rise finally came to an end, pulling back a smidgen this week. Restocker prices have continued to plunge whilst heavy steers gave back some of the progress made last week.

Yardings leaped up 12% from the week prior.  The increase in cattle to market was mostly coming out of NSW, which increased numbers on offer by 36%, followed by QLD, which offered up an extra 9%. This was offset by VIC, which saw a 13% slowdown.

Overall, yardings increased by 4,887 head on the prior week which saw 45,086 cattle yarded on the east coast for the week ending 6th November; which is 13% below the levels seen at the same time last year.

Slaughter numbers continued to fall back last week, seeing a 4% fall on the prior week, with the reduction lead this time by VIC, which processed 19% fewer animals, followed by NSW, which saw a 10% fall. QLD slaughter picked up around 5%, offsetting most of the decline emanating from NSW.

A total of 102,813 cattle were processed for the week ending the 6th November: 33% down from the same time last year.

The EYCI crawled backward marginally this week, down 3¢ to finish the week at 824¢/kg cwt as of the close of yesterday.

On the categories, restocker steers continued to come back to earth, while heavy steers gave back some of their energetic increase seen last week. Feeders keep marching upward, and vealers were volatile as ever.

Vealers displayed characteristic volatility, increasing 22¢ (5%) to reach 456¢/kg lwt at the end of the week.

Feeders have continued to display a slow and steady upward movement, adding another 2¢ (<1%) this week, to finish up at 435¢/kg lwt.

Processor steers and medium cows were largely inert, remaining at 427¢/kg lwt and 301¢/kg lwt, respectively, while medium steers put on an extra 5¢ (1%) to conclude at 392¢/kg lwt.

The 8 day rainfall outlook, though not as good as last week, is nothing to sneeze at, with a sprinkling of rain coming down the east coast – mid eastern NSW looks like it will receive the best prize in the coming days, with the wooden spoon awarded to northern QLD, which will largely miss out. History shows that, on average, as we get further into November, yarding’s tend to pick up quite a bit, so we might see substantially more selling pressure coming into the market over the next few weeks. In contrast, slaughter has usually been stable until we get closer to Christmas, so softer pricing going forward may very well be on the cards. 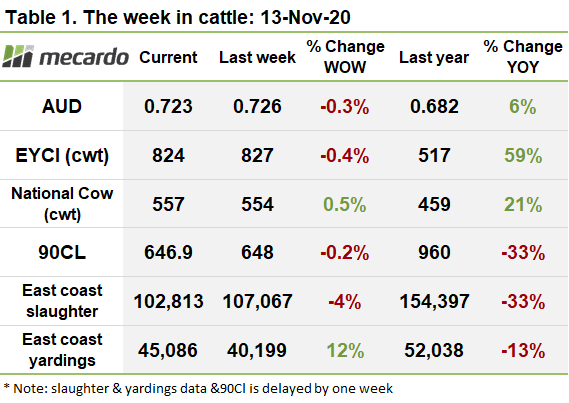 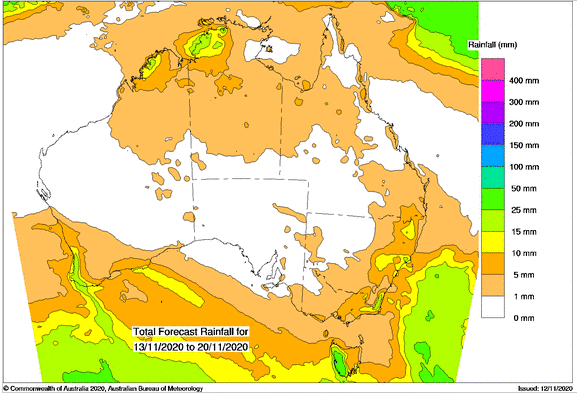