Restockers, Feeders, Processors and the EYCI

Today we continue to lift the bonnet and look at what makes the Eastern States Young Cattle Indicator (EYCI) tick, and take a look at how particular buyer groups are influencing the average price of young cattle. Not surprisingly, Restockers are prominent in the mix, paying an average price well above that of the rest of the market.

The Eastern States Young Cattle Indicator (EYCI) is a rolling seven-day average of the prices fetched for a wide range of weights and specifications of young cattle across the eastern seaboard.

The EYCI is a good general yardstick about the state of Australia’s cattle market, but naturally, the price may not be a full reflection of the value of the cattle an individual producer may be considering marketing. Some animals are worth more, and other less depending on their specification, and what type of buyer typically competes to purchase that class of cattle.

One useful way the market for young cattle can be roughly broken down is by buyer class, namely Restockers, Feeders and Processors. This is the destination of the cattle sold at saleyards that qualify for the EYCI as recorded by MLA.

We can decompose the EYCI over time into its components, or sub-indexes which, when averaged by the number of cattle in each, make up the final EYCI number.

In this case, we will call these buyer-class based components the REYCI (restockers), FEYCI (feeders) and PEYCI (processors) and compare them to the total EYCI.

From figure 1, you can see that the Restocker component of the EYCI, the REYCI, at 1,110¢/kg currently sits at a substantial 81¢(8%) premium to the EYCI. This was not always the case though, as back before the drought broke in 2020, in late 2019, restockers were generally buying cattle at a 30-40¢ (5-8%) (figure 2) discount to the EYCI. As such, the cattle market clearly displays significant segmentation in demand,  usually dictated by the season.

Similarly, cattle purchased by feeders, represented by the FEYCI, which currently sits at 981¢/kg cwt, are currently purchased at an average 47¢ (5%) discount to the EYCI.

Finally, the PEYCI, representing processor buyers takes the wooden spoon, at a current level of 898¢/kg cwt, which is a whopping 130¢ (13%) discount to the EYCI. Processor buyers purchase a particular specification of cattle which is not attractive to the restocker and feeder buyers, meaning that these animals are largely priced at their meat value only, with no premium for potential trading profits unlike the other classes of cattle.

You will notice that there seems to be a huge gap between the restocker REYCI price and that of the Feeder FEYCI and processor PEYCI. So why isn’t the EYCI average lower than it is, given two of the three classes of buyers we have presented sub-indexes for appear to pay substantially less than where the EYCI is now?

The answer is that that the three sub-classes of buyer do not have equal influence upon the EYCI, and this is dictated by the number of cattle sold to each type of buyer. For example, processors are currently only 10% of the total number of eligible cattle that make up the EYCI, with restocker buyers at 43% and feeder buyers at 47%.

From figure 3, we can see that the contribution that the number of head of cattle purchased by restocker buyers provides to the final EYCI price tends to follow a seasonal pattern, peaking in mid-winter to spring, with numbers trailing off in the summer months.

The Eastern Young Cattle Indicator (EYCI) is a price indicator of a wide range of specifications of young cattle, the relative prices of which influence its final level.

On top of this, the cattle market is segmented by the individual demand of certain types of buyers, who compete for differing specifications of cattle.  At present, it is clear that restocker buyers are the main source of the elevated prices of young cattle in Australia. However, this is not always the case, such as seen in drought years with poor pastoral conditions where demand for cattle suitable for growing to finished weights was not strong. 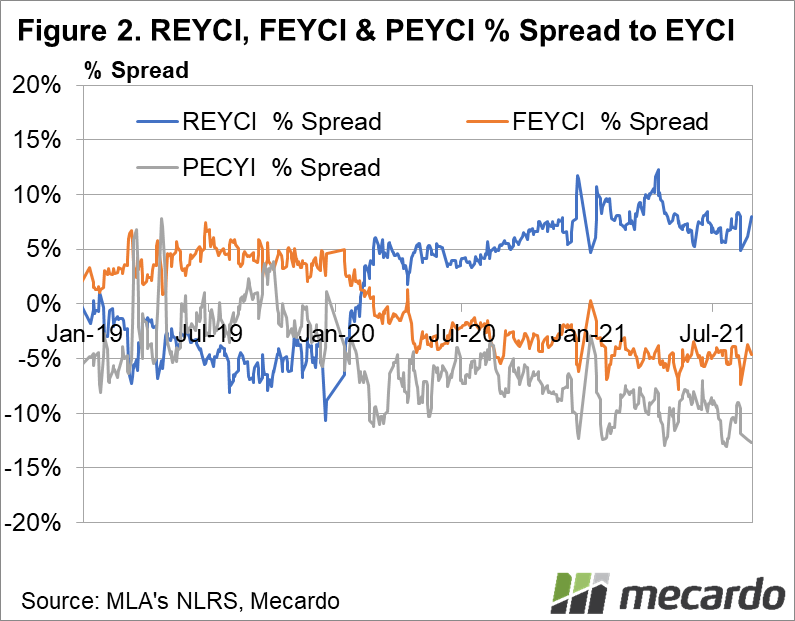