Restockers on the rise

The cost of ewes is often the focus at this time of the year, and in 2020 especially, as producers look to not only pick up their usual quota of replacements, but also to boost their flocks back to pre-drought numbers and higher to capitalise on good spring rainfall and strong lamb prices. But breeders aren’t the only category in demand to fill paddocks, as the restocker lamb price heads back towards record territory. Those looking for the quickest way to turn the remainder of their green feed (including stubbles) into monetary return are betting on store lambs, and alongside lotfeeders, they’re driving the price for stores.

The national restocker lamb indicator hit a record high of 1025¢/kg carcass weight in March this year, as well as averaging 953¢/kg for the month – the highest monthly average on record. This was 34% higher than the average for March 2019, as rain started to fall in the south east and there was promise of plenty more to come. The price then eased all the way to 632¢/kg in August, as winter wasn’t as wet as expected and new season lambs hit the market early. Jump to the first week in November, and the national price is back above 901¢/kg, up close to 100¢/kg on the same time last year and rising about 40% since August.

If we exclude Western Australia, which hasn’t had the same seasonal success this year of the other sheep producing states, the price is even higher. The Eastern States restocker lamb indicator closed last week at 942¢/kg, up 133¢/kg for the year, jumping 27¢/kg in the past month. And its NSW leading the charge, with their restocker indicator up more than 30% from the same time last year at 998¢/kg.

Why? It has to be pure demand, but it’s not looking like it is supply driven, with national lamb yardings pretty much on par year-on-year for October. Meat and Livestock Australia reports more than 20,000 restocker lambs were offered in the eastern states for the week ending 30 October, compared to 819 in the first week of August. Plenty of store lambs are being sold through AuctionsPlus, with producers no doubt appreciating the option to leave them in the paddock if the price isn’t right – and not knock any further kilograms off in pre-sale transit. Last week more than 33,000 head of store lambs were offered on the box, with a 95% clearance rate, and prices averaging 417¢/kg lwt – with the best-selling at 693¢/kg lwt.

If you’ve got lines of lambs left in the paddock with some weight variety, and are looking to offload a majority by Christmas, you could consider selling on the lightest portion as stores now, and focusing on feeding those closer to kill weight. The extra kilograms on trade or heavy weight lots will likely equate to more dollars in the bank for the feed you are using, with the lightest portion still returning plenty of profit. 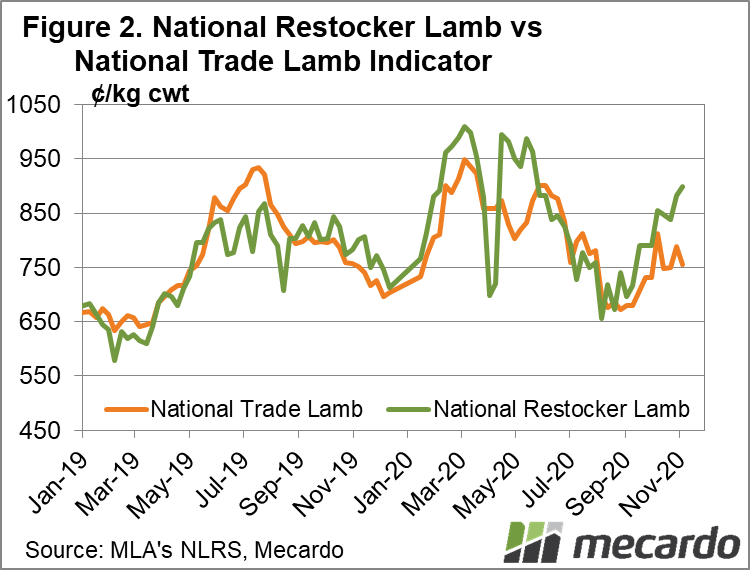