Restockers propping up the market

Most lamb and sheep price indicators are traveling below this time last year, that is, except for restocker lambs. The positive outlook for sheep meat demand and seasonal conditions allowing flock expansions to take place is keeping restockers active and prices buoyant.

The Eastern States Trade Lamb Indicator gained 7¢ over the week to 829¢/kg cwt. In the west the weaker market momentum continued as Trade lambs dropped another 18¢ to 814¢/kg cwt. The WA heavy lamb Indicator ended the week 23¢ lower too but remains 174¢ or 26% higher than the same time last year, reflecting the change in market dynamics in the west.

Restocker lambs were well sought after and remains the only National lamb indicator sitting higher than the same time last year. After a 53¢ gain this week Restocker lambs at 960¢/kg cwt are 44¢ higher than the same time last year. There was little movement in the National Heavy Lamb Indicator, while light lambs ended 21¢ lower at 829¢/kg cwt. The National Mutton Indicator dropped 13¢ to 559¢/kg cwt.

Weekly slaughter is the figures we are still watching with interest. For the week ending the 11th of February, east coast lamb slaughter was 12.5% lower than the week prior and just 5% under the same week last year. Sheep slaughter remains subdued as flock rebuild intentions continue. Last week 90,775 sheep were processed which was 10% lower than the same time last year. While total slaughter rates remain subdued, processor capacity issues don’t appear to be as bad as they were in January.

Lamb supply to the yards is usually steady in February and March, however it will be interesting to see the flow of lambs held longer on farm than usual this year. Rain is on the forecast for the east coast over the next two weeks while the outlook for western Vic, western NSW, SA and the WA is looking fairly dry at this stage. 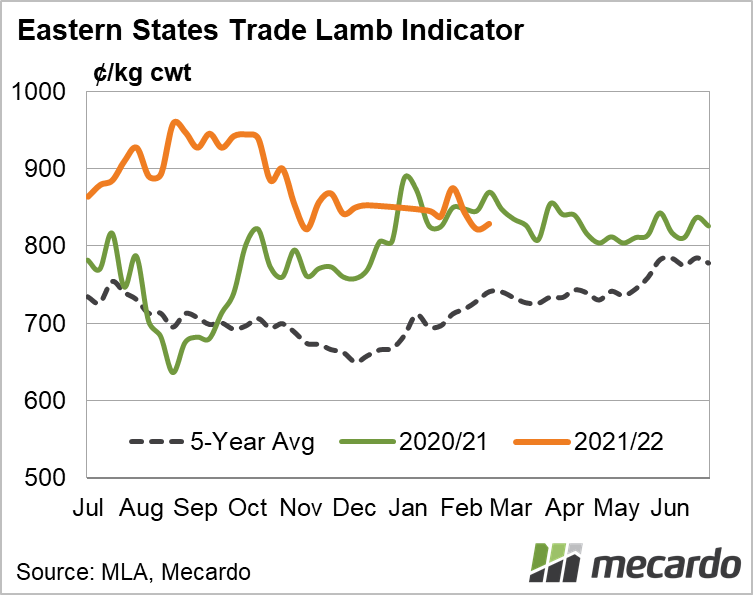