Green was splashed across the board this week with lamb and sheep markets revelling in strong competition at yards in NSW and SA. Supply increased last week, although slaughter continues to lag below levels usually seen at this point in the season.

Saleyard lamb and sheep throughput lifted in the week ending the 17th of September. East coast lamb yardings increased by 41% on the week prior thanks to a large lift in most states. Over 200,000 head were yarded, which is a return to more normal levels. Sheep throughput increased 76% week on week. With 79,402 sheep yarded this was 13% higher than the five-year seasonal average level.

The Eastern States Trade Lamb Indicator (ESTLI) improved 15ȼ on the week to end at 942ȼ/kg cwt.  In the West, most categories made minor moves over the week, with the Western Australian Trade Lamb Indicator down 2ȼ to 737ȼ/kg cwt. Restocker lambs were the exception in WA, gaining 21ȼ to 710ȼ/kg cwt.

NSW and SA were the driving force behind price improvements in the east. Restocker and light lambs in NSW were well sought after, with the NSW Restocker Lamb Indicator lifting 58ȼ to 1,048ȼ. Restockers also gained an extra 69ȼ in SA to 1,053ȼ/kg cwt.

Store lambs didn’t find the heat in Victoria this week. Restockers lost 29ȼ and light lambs eased 11ȼ. Merino lambs ended at the bottom of the ladder after losing 76ȼ to settle at 738ȼ/kg cwt.  Trade and heavy lambs managed to hold their ground though.

Mutton wasn’t left out in the stronger market. The National Mutton Indicator increased for the first time in weeks, gaining 18ȼ to 627ȼ/kg cwt.

The Bureau of Meteorology rainfall outlook for October signals a wet month ahead for the east which will support producers to hold lambs when the spring downturn eventually kicks in and take the pressure off price. 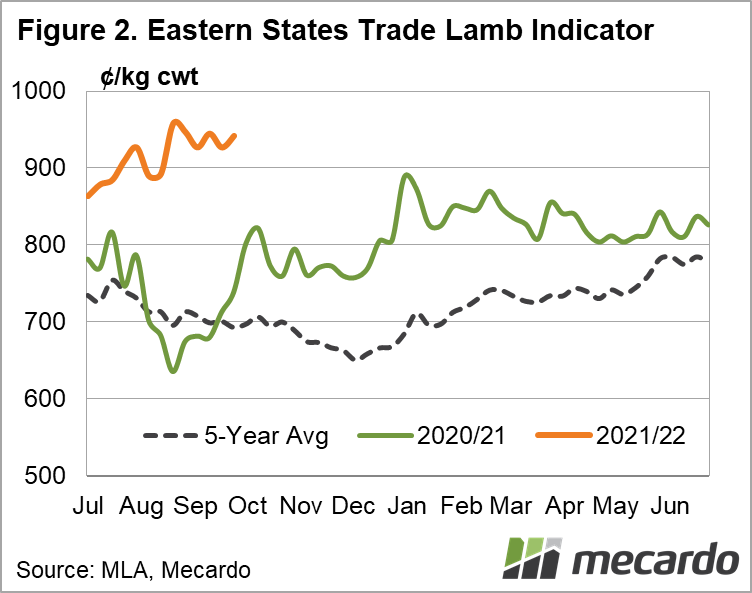