In the past week, the wheat market looked to have taken a breather from the heavy bearish trend that had set in over the past couple of weeks. The fact that we saw several large tenders emerge from big buyers, Jordan 500kmt and Egypt 815kmt, offered some hope that we had turned a corner.

Last night the USDA released their June acreage report.  I don’t really know what the market was looking for, but they didn’t find it.  Corn and wheat matched analysts predictions and should be considered neutral, but the news was met with a collapse in both markets, down 34ȼ/bu and 43ȼ/bu respectively.

It is hard to pinpoint the exact reason why the market reacted so negatively last night. The remarkable thing is that wheat is now approaching pre-war levels and yet, nothing has been resolved. On the face of it, Russia is producing a huge crop but will face challenges in meeting export expectations.  The Russian farmer will be reluctant sellers due to the exorbitant export tax, but with a large crop, will still offer up some volume.  Case in point, the Egyptian tender mentioned above, should have been dominated by Russian wheat, but instead, only 3 cargoes (180kmt) were offered.  This is Russia’s time to shine, but sanctions and logistics are going to create some headwinds.

Possibly troubling the market is news that Ukrainian grain is flowing out of Berdyansk and Mariupol from within the Azov Sea.  The grain is moving under a Russian flag, despite Moscow’s assurance that no Ukrainian grain has been taken.

The other pillar of support is on shaky ground.  US weather is fairly benign for the row crops, with both corn and bean areas expecting good rain this week ahead of any heat.  Early reports of problems in the Brazilian safrinha corn crop also appear to have been over stated.  Early harvest results would indicate that a record crop remains on the cards.

Demand has been slow to materialise this year.  As mentioned above, we saw sizeable tenders announced this week but as a whole, the big end users remain behind schedule with their buying patterns.  Last night’s dip may provide the catalyst for another round of buying.  The pace of demand and the ability of Russia to meet that demand will be key going forward.

Unpredictable, erratic, unstable, counter intuitive.  My thesaurus is running out of adjectives to describe this market.  A worsening macro-economic environment is adding negative sentiment across all commodities, but eventually the realities of inelastic demand and tight supply “should” see prices stabilise. 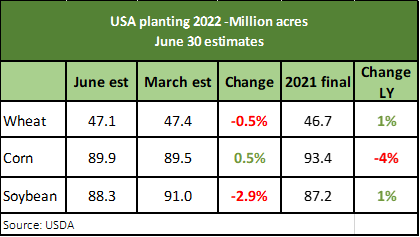