Risk in a processing bottleneck

As we move towards spring, the flush of lambs draws ever closer. With it comes the question as to what lambs will be worth when many are sent to slaughter and through saleyards from October to December. This year we have added concerns around slaughter capacity. In this article we take a look at how things might play out.

With Covid-19 limiting the availability of seasonal workers to help process the spring flush of lambs there are real concerns surrounding how many lambs are going to be on the market in the spring, and how they are all going to end up in boxes.

Traditionally lamb and sheep processors will take advantage of the spring flush by increasing capacity to slaughter lambs which are usually at their cheapest and therefore provide attractive margins for processors.  This year there could be limitations on the ability to increase processing capacity due to the lack of seasonal workforce from closed borders.

Our usual way of projecting lamb supply is to take Meat & Livestock Australia’s annual slaughter forecast, deduct what has gone so far, and divide the rest by the seasonal trend.  In figure 1 we have combined sheep and lamb slaughter and run this analysis.

If October and November slaughter space is constrained at last year’s levels, and MLA’s forecasts of 21 million lambs and 6.1 million sheep are correct, there will be an excess of around 300,000 sheep and lambs in the spring. If the season turns out to be as forecast, this won’t cause too many price issues.

However, if slaughter is constrained to the highest levels we have seen this year, which is around 2.2 million head per month, and indicated by the red line on figure 1, there will be over 600,000 head excess.  This sort of excess supply will be hard to spread into the New Year, especially if capacity remains constrained.

Worst case scenario for price is increased supply, still below five-year average levels, but much stronger than last year.  If we run the analysis with 21 million head of lambs and 6.25 million sheep, we get figure 2.

If slaughter was constrained to the maximum seen for the year to date, this would leave an excess of 1 million head of sheep and lambs just in October and November, which would carry over through the first half of 2022 if processing capacity can’t be increased.

There are plenty of variables in the analysis as there always is when looking at supply.  This year we have the added labour issues to worry about. Best case scenario for price is a limited spring flush as the flock rebuild continues, and the season remains kind, putting prices at similar to slightly better levels than last year.

Worst case scenario is an ordinary spring, (hot days in NSW in September), initiating strong lamb supply, limited restocker demand and constrained slaughter capacity.  This scenario is similar to what the US has been experiencing with cattle over the last 18 months, and it hasn’t been good for prices. 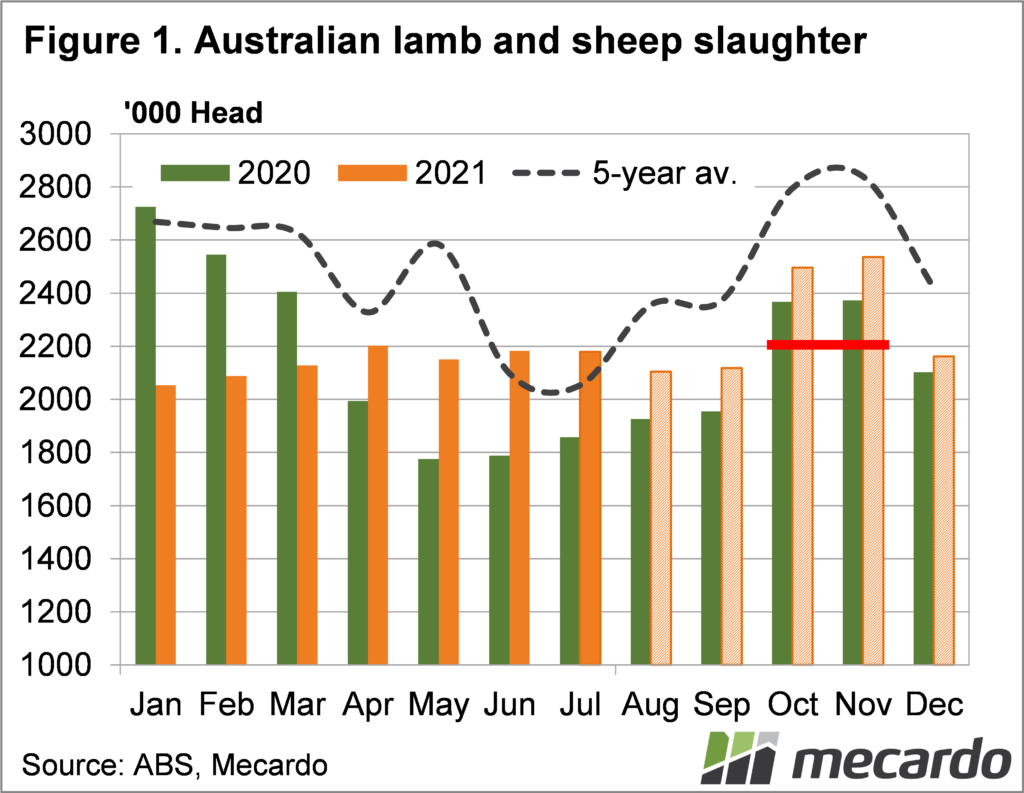