The consolidation at the end of last week turned into a retracement of prices this week. AWEX reported this week that the Australian wool market was unable to maintain the strong gains of last week, posting falls across all categories.

Selling last, Fremantle initially lost ground on Tuesday, before positive sentiment emerged towards the end of the week. For the week, the Western Market Indicator (WMI) fell 33ȼ cents to 1368ȼ. Fremantle sold 5,763 of the 8,169 bales offered with 29.5% of offered bales passed in.

Cardings were not spared in the tough market, Fremantle eased 47ȼ, while in Melbourne the indicator fell 31ȼ and 40ȼ in Sydney.

This week on Mecardo (view article here), Andrew Woods took a look at the moves in micron for the Australian clip. The swing in fibre diameter which underpinned a resurgence in micron premiums and discounts since mid-2020 has run its course. The average merino fibre diameter is running at levels slightly finer than a year ago. This implies that micron premiums and discounts, which are still at elevated levels, will narrow in the coming year.

Next week a smaller offering is listed for sale in Fremantle, Melbourne & Sydney. All centres are selling on Wednesday & Thursday, with 40,276 bales currently rostered. 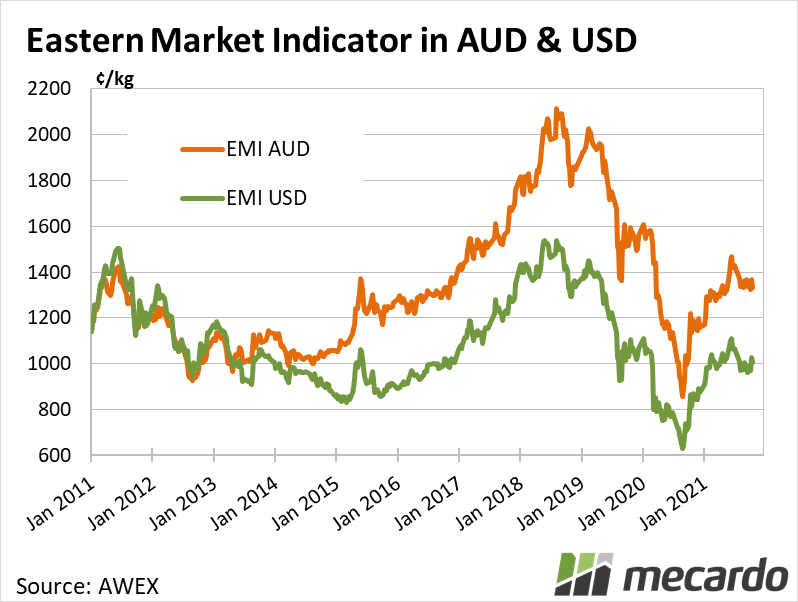