It’s hardly a surprise, but the EYCI has breached the 1000ȼ/kg level and Roma, QLD, has been one of the main contributors to it reaching this new pinnacle. Yarding’s for the week also picked up against the typical trend for this time of year as sellers were attracted by buoyant market.

Yarding’s lifted a solid 23% last week, with all the extra selling action happening in QLD, representing 103% of the total rise, with VIC providing an extra 15% on top. However, NSW hit reverse gear, with the falls in offerings equal to -20% of the net increase for the week.

East coast slaughter reduced by 5% last week. The main negative impetus came from NSW, which fell 9% week on week, representing 56% of the downward movement, followed by VIC, where falls equated to 29% of the national decrease. A lift in yardings is somewhat out of character for this time of year, so the high prices must be the attraction to sellers stepping into the market.

The EYCI continued to push further into the history books, progressively climbing higher over the week with barely a stumble to rise another 15c (2%) to achieve an unprecedented 1,003c/kg cwt, on a volume of 13,879 eligible cattle; only 2.5% above the prior week.

Roma Store continued to impress, averaging 1,019ȼ/kg over 5,570 head, composed entirely of yearling steers and Heifers, but Dalby’s price was behind the pace, at 978ȼ/kg cwt, with yearling heifer prices of only 958ȼ/kg dragging the average down below the 1,009ȼ/kg yearling steers were achieving in that market. Wagga fared better, at 1,030c/kg, on a smaller yarding of only 831 head, but heifers were the letdown again, with yearling steers fetching an average of 1,069ȼ/kg.

The national indicators mostly moved into positive territory this week, with medium and processor steers the standout of the bunch, while volatile vealers pushed up strongly in addition. This week, we will take a look at how much each of the indicators have advanced from levels seen at the start of the year, and interestingly, it is processor steers that have achieved the biggest percentage gains, not restockers.

The Aussie dollar fell another 0.3% since last week to 0.738 US at time of writing, recovering from intraweek lows of 0.7329. The possible cause continues to be cautious “risk off” investor sentiment and worries about COVID resurgence, with the safety of reserve currencies preferred to volatile equity markets.

US 90CL frozen cow prices took a downward turn losing 2ȼ (<1%) this week, as the price in USD fell, cushioned slightly by the depreciation AUD. Steiner consulting reports that buyers have taken a pause as they consider uncertain forward demand, while supply of cheaper south American beef lifts, and forecasts of increased volumes of Australian beef shipments circulate the market.

Little rain is coming in the north over the next week, with many parts of southern VIC and some areas of central southern NSW receiving a solid 25-50mm. With the EYCI so high, going from strength to strength each week, it’s possible that more sellers will be attracted into the market again next week, but it’s questionable about whether increased supply is likely to put a dent in prices. 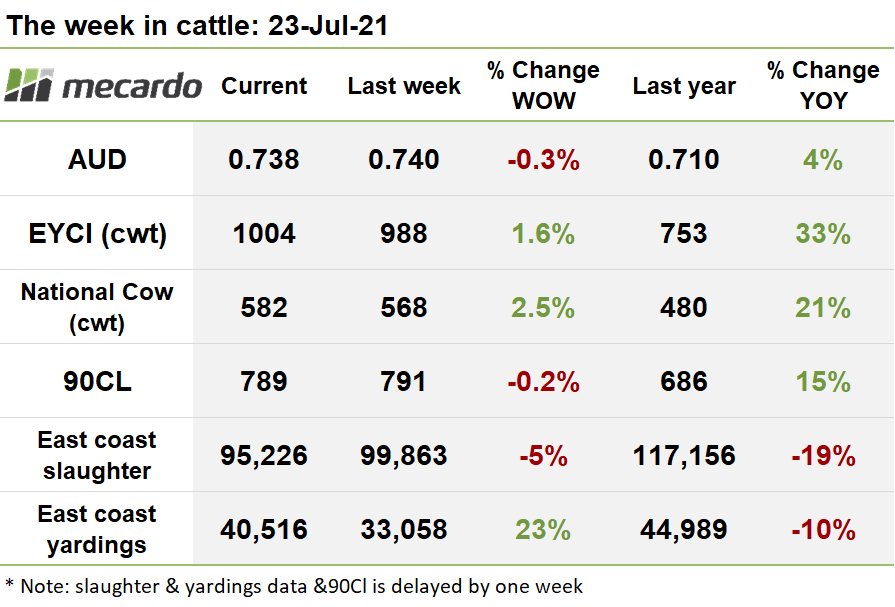