Sale volumes up in August

Demand, or lack of it, remains the key focus of the greasy wool market which is trading in the toughest conditions of a generation, since the collapse of the Reserve Price Scheme in the early 1990s. Despite the weak demand and falling prices wool is still being sold to the supply chain, so this article looks at August sales volume and the micron price curve.

Supply by itself is not strong enough to hold prices up in the current economic maelstrom. However supply will still affect the relative pricing of different wool categories and as such is worth monitoring.

Firstly the micron price curves. Figure 1 shows the micron price curves for combing length fleece, without subjective faults, ranging from 14 to 39 micron for Australian wool sold at auction in August 2019 and August 2020. In August 2019 (before COVID-19) greasy wool prices fell heavily, following the lead of other apparel fibres. Premiums for fine merino wool remained very low, while broad merino prices continued to average around 1700 cents. 28 micron was trading at half of the 21 micron price.

In August 2020 prices fell again with the broader merino averaging around 1000 cents. Fine merino premiums had risen considerably, with the 14 micron price for August 2020 matching that of 2019.

In Figure 2 the change in auction sales volumes (clean terms) by micron category from 14 to 39 micron is shown (bars), along with the change in clean price (line). Sales in August 2019 had fallen to low levels with only 61% of wool sold in response to the fall in prices. By contrast in August 2020 72% of wool rostered for sale was sold. Given the caveat that August 2019 sale volumes were low, it is still surprising to see some of the increases in the volume of sales for August 2020. Broad crossbred sold volumes were well up on year earlier levels, in the most depressed section of the market. Were broad crossbred wool owners quitting their stocks? Broad merino sold volumes were also well up, while fine merino volumes (18 micron and finer) were considerably lower.

In Figure 3 the change in volume for 14 micron through to 23 micron is shown (bars) along with the change in the micron price curve (premiums and discounts to the 19 micron price). There was little change in 19 to 23 micron discounts (to 19 micron). They were only slightly wider, with a reasonable correlation between the increased discounts and increased sales volumes. Where the volume of supply switched from rising to falling (19 micron) the micron premium curve inflected upwards, with a strong correlation between the falling sales volume for 18.5 micron and finer wool and the rising micron premium (relative to 19 micron).

Merino micron premiums play a role in determining breeding strategies and the increase in premiums during the past year is welcome after a tough period since 2013. The increase in broad merino sales volumes this August compared to a year ago was a surprise, and allied with much weaker demand, helps explain the continuous slippage in medium/ broad merino prices. Likewise for broad crossbred prices where increased sales volumes allied with weak demand has resulted in very poor trading conditions. 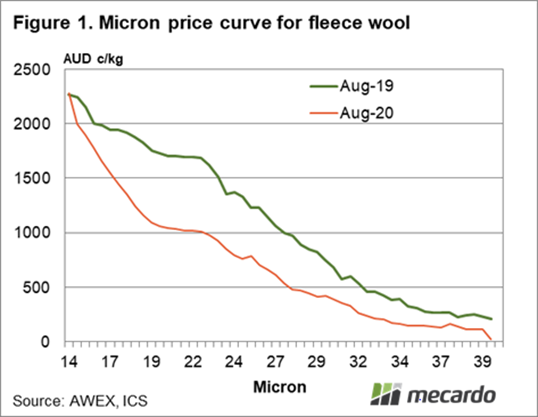