Sales down but stocks up

The stark reality of the wool market woes is reported in this week’s AWEX report; the EMI in Au$ terms is 605 cents or 35% lower than the same period last year. As far as supply is concerned, over the past three months there have been 70,000 bales fewer sold than the corresponding period last year. The figures for bales sold year-on-year are also telling, with 250,000 or 16.7% fewer bales having been sold to date, representing not only a fall in supply but also the higher withdrawal and pass-in rates by growers.

The Eastern Market Indicator (EMI) again disappointed falling by 29¢ this week to close at 1,110¢. The Australian dollar firmed to US$0.695 which influenced the EMI in USD terms to fall by a more modest 12¢ to 771¢. Fremantle came back to selling with the Western Market Indicator playing catch-up falling 71 cents from the previous sale to settle at 1,176¢.

Turnover was up with the inclusion of Fremantle to $31.75 million this week, with the average bale value of $1,280 slightly lower than last week, taking the season to date value to $1,972 million.

Mecardo reported this week that unsurprisingly wool stocks in wool stores have grown as the fall in demand flows back to the auction room causing a dramatically reduced clearance. In Andrew Woods article this week he noted “The indications are that this state of affairs will persist into the coming spring. In the longer run the stocks will slow the subsequent (price) recovery but not to the extent of the 1990s as production is now low whereas in the early 1990s it was at record levels.”

The Crossbred sector was also impacted by the weaker market with falls of 20 to 40 cents across the microns.

Cardings have been holding reasonably well, but this week the weight of negative sentiment saw the cardings indicator in Sydney retreat 44 cents, Melbourne minus 50 cents and Freo pulling back 19 cents.

Next week all centres sell on Wednesday & Thursday with 31,072 bales on offer. This is almost an identical offering as this week; however, the question for the wool market is one of demand and this for now is weak. 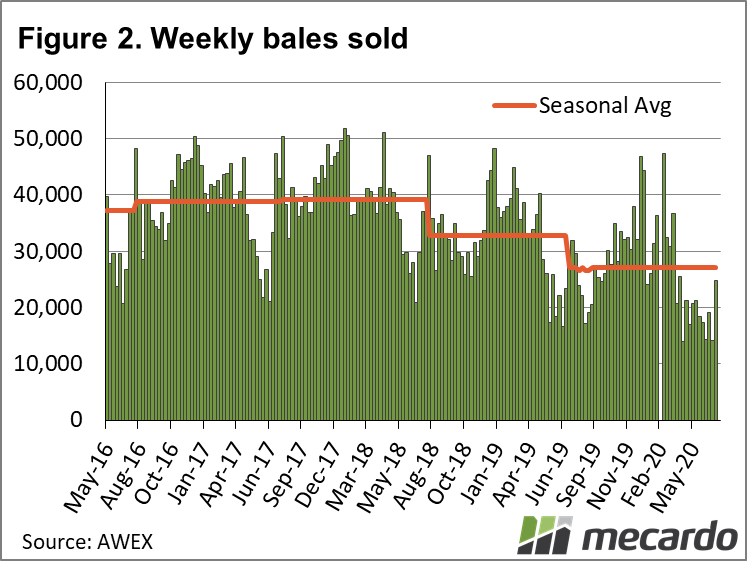