The invasion of Ukraine has had far reaching consequences for the world’s food supply, and sanctions upon Russia are set to have the impact of reducing Russian crop yields by stifling the supply of quality seed required to produce high yields

Russia is a major producer and exporter of wheat, sunflower seed products, and canola.

In the 2021/22 cropping year, the USDA expects that Russia will produce 75mmt of wheat, 16mmt of sunflower seeds, and 2.8mmt of canola.

According to Victor Yukushev, a former director of the Russian Agrophysical research institute, somewhere between 50% and 70% of Russia’s Oilseed crops, including sunflowers, and canola, are grown from imported seed.

The majority of this seed is sourced from western European countries. While foodstuffs are largely excluded from sanctions against Russia, seeds are captured in the net of untouchable products.

The data doesn’t directly distinguish between the importation of seed for consumption versus planting. However, given that Russia is a substantial producer of all three, the assumption can be made, that a reasonable proportion of these imports are probably for the purposes of sowing new crops, and not just specialty imports of organic or biodynamically produced foodstuffs from Europe for discerning and wealthy Russians.

These tonnages do not look like much compared to the millions of tons we see in typical commodity exports, but remember that in broadacre seed world, a little goes a long, long way.

Admittedly, this analysis of Russian “seed” imports indicates that in many years, the amount of imports could cover Russia’s planted area many times over in some cases, so odds on a good chunk of these imports probably aren’t being used as seed. However, this still lends credence to claims by some commentators about the potential high reliance of these sectors of Russian agriculture on imported seed, because the volumes are high enough that it doesn’t look out of the realms of possibility.

In the case of wheat seed requirements, given that imports would only cover around 10% of the planted area, the impact of any seed related sanctions on Russian yield, and hence world supply of wheat are substantially less material.

In any case, the view is that this cropping year probably wont be impacted, as the seed was largely already in the country, or in the ground, but next year, in 2022/23, sunflower and canola yield are expected to be aversely impacted by the use of suboptimal varieties.

With Russia’s access to purpose bred, higher yielding seed varieties cut off, this is likely to lead to lower yields in future years, particularly in relation to sunflowers and canola. As a significant contributor to the oilseed complex, yet another blow to world supply will provide yet more support to canola prices in the 2022/23 cropping year, and beyond. 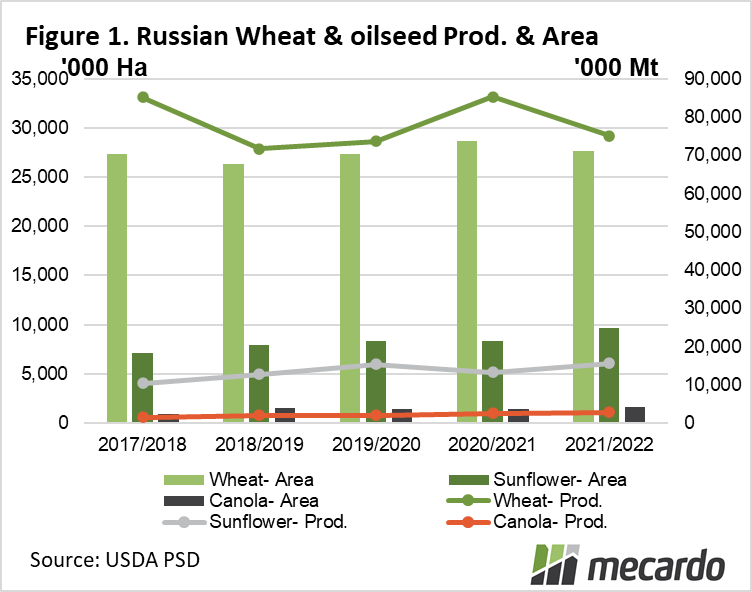 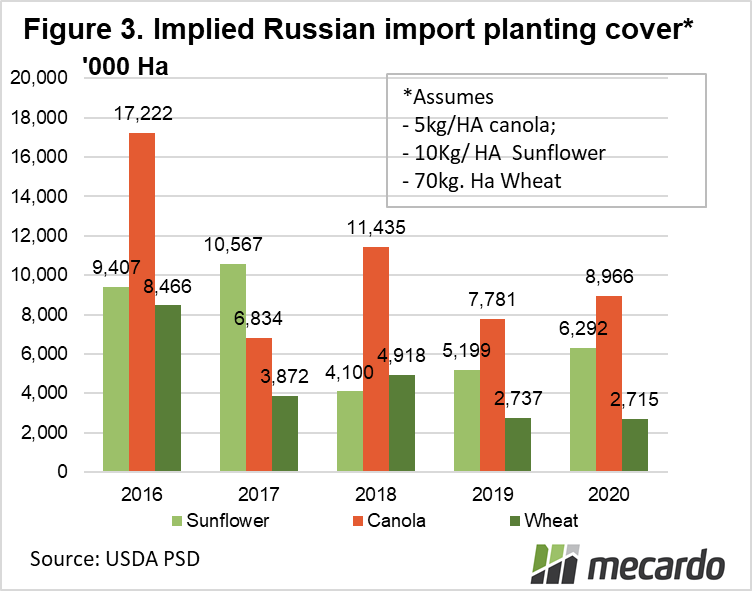