The 2021/22 selling season finished on a depressed note this week in the face of a large offering. News of a fire at one of the largest wool processors in China late last week and, according to AWI reports, some shipping logistical issues that delayed buyers’ funds, sent auction rooms into a spin.

All medium to fine indicators fell this week between 5 to 125ȼ with the biggest falls recorded in Fremantle. The 18 – 19 microns over in the west all fell by over 100ȼ each. The Western Market Indicator also dropped, falling by 34ȼ to 1529ȼ/kg.

In Melbourne the biggest drop was by the 20 micron which fell 74ȼ, whilst in Sydney it was the 18.5 micron, which sunk by 113ȼ.

Moving to crossbreds and the 26 micron in Melbourne bucked the trend and lifted 11ȼ to 691ȼ/kg, while all other crossbred wools fell slightly or stayed put.

Cardings fell by 17ȼ in Sydney & by 4ȼ in Melbourne, while the Fremantle counterpart lifted by 11ȼ, now sitting equal with Sydney at 929ȼ/kg. The cardings indicator in Melbourne is slightly lower at 910ȼ/kg.

This week on Mecardo Andrew Woods took another look at premiums for RWS accredited wool concluding that on average, RWS accredited good merino fleece has sold for substantial premiums this season, although the volumes remain very low in Australia still, especially for the 19.5-20.5 micron range.

Next week is the first sale of the 2022/23 wool selling season and is traditionally one of the largest of the year. This is certainly the case for next week with 52,182 bales on offer across the 3 major selling centres. The fire at the processing facility in China is certainly significant news and will have implications for the market. As the extent of the damage surfaces, the type of implication will become clearer, but lost product will need replacing in some form eventually. 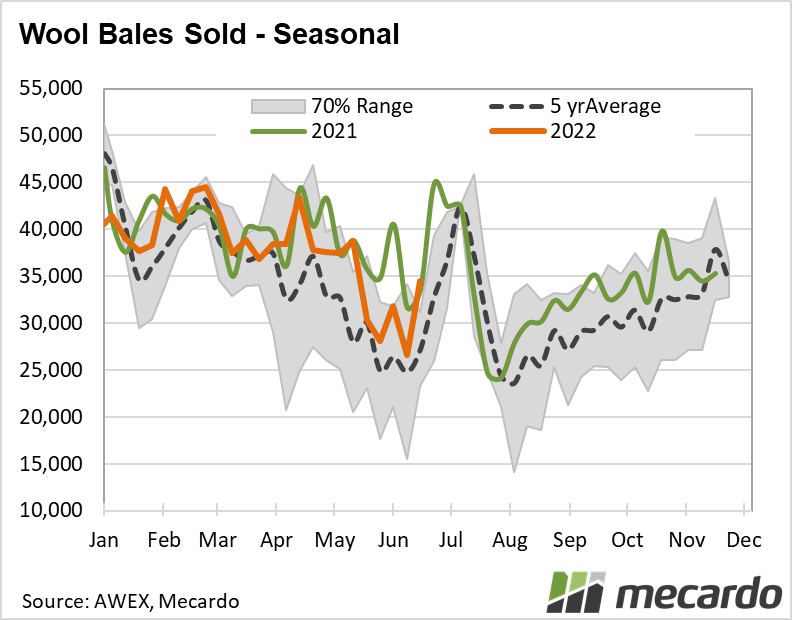