One could be forgiven for thinking that sheep and lambs were on paddock lockdown last week based on the saleyard throughput figures. Weekly east coast lamb yardings were already tight for this time in the season, but last week reached a low that pre-dates Mecardo’s records.

East coast lamb yardings were 79% below the five year average trend at just 39,798 head (Figure 1). We’ve been looking at the 2011 season as a reference point of how supply played out during a rebuild. However, last weeks throughput suggests that we might be reaching into new territory. The low in 2011 still saw 70,000 lambs pass through east coast yards and this was during a week of Easter disruption.

The story was much the same for sheep yardings. East coast sheep throughput fell 66% from the week prior and was 83% below the five year average trend (Figure 2). Zoning in on the various states and it was clear who drove the dramatic fall in yardings. New South Wales combined sheep and lamb yardings were 89% below the five year average, while Victoria wasn’t far behind at 69% below the average trend for this time of the season. Recent rain in these regions appears to be adding more optimism to the outlook and incentivizing producers to hold onto stock.

Sheep and lamb slaughter volumes saw little change from the week prior. Weekly east coast sheep slaughter remains at 53% below the same period last year (Figure 3). For the calendar year 2020 to April, sheep slaughter was down 25%, so the trend is increasing which is positive for the Australian flock.

All CV indicators responded to the lower supply with gains. The Mutton CV19 indicator lifted 5.3% on the week to $180/head and the Processor lamb indicator picked up an impressive 10% to $220/head. The Restocker lamb CV19 indicator also had a modest rise over the week of 3.8% to sit at $164/head on Thursday.

The winter rainfall outlook released by the Bureau of Meteorology this week looks promising for much of the country. Tight supply is certainly here to stay. Whether last week’s slaughter and yardings figures hint at just how tight we can expect the next few months to be, is something we’ll be watching closely. 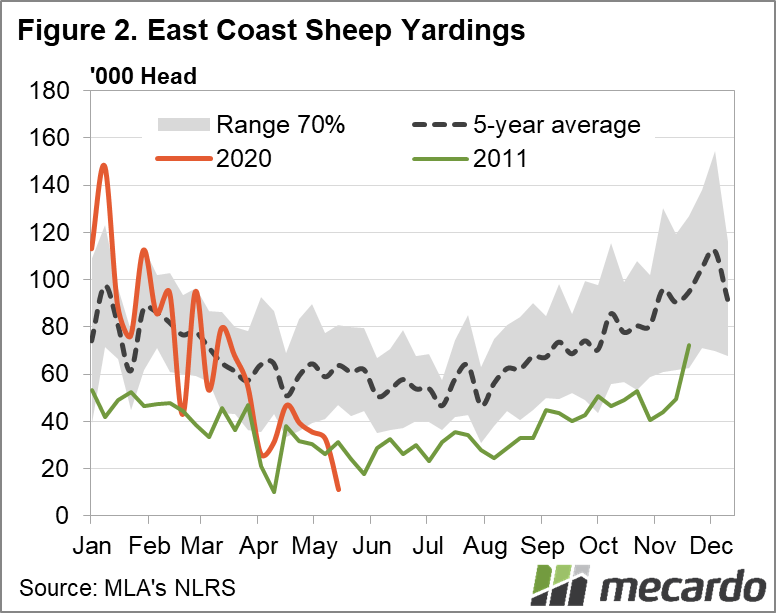 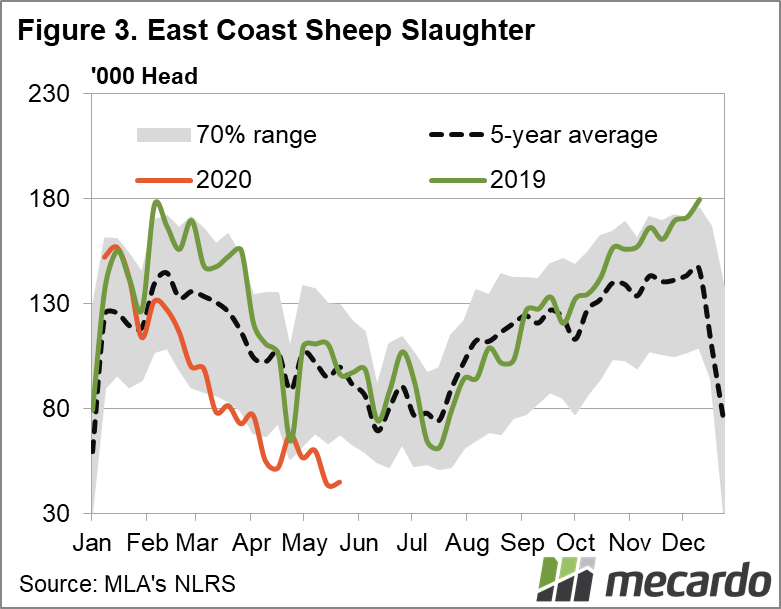