Money for mutton surged higher for the start of April, gaining more than 50¢/kg for the first two weeks of the month, before losing all that ground and more in the second half of the month. This volatility in the mutton price is not highly unusual around the Easter break, which causes two short-processing weeks, but it does make you wonder what’s next for mutton, and how long ewes will remain hot property.

As we can see in Figure 1, mutton prices generally trend higher for March and April, before dipping in May and rising again in June. This year appears to be no different. East Coast sheep slaughter – Figure 2 – is also tracking relatively closely to historical movements, having picked up in recent weeks and likely to drop off as we move closer to winter. The National Mutton Indicator opened yesterday at 620¢/kg, a drop of 29¢/kg from the same time the previous week, and 16¢/kg below year-ago levels. However due to Easter falling on different dates each year, the monthly average might be a better way to gauge where the mutton price is. The NMI is averaging 664¢/kg for April (to-date), compared to 636¢/kg in 2020, and 501¢/kg in 2019. While this week’s figures will lower the April average, it is still likely to close higher year-on-year. This is despite national weekly sheep slaughter figures being higher year-on-year for six of the past seven weeks.

Restockers have apparently taken their foot off the pedal when it comes to buying sheep in the past two weeks, contributing to the drop in price. They are no doubt waiting to see what eventuates of the autumn break, in addition to lightening the load as crops go in the ground. We could also be reaching a point in the flock rebuild where enough ewe lambs have been retained that buying in scanned-in-lambs or ready to join older ewes is not as necessary to build numbers as it was earlier in the year. So, what’s causing the higher slaughter? February and March scanning rates have come in, and without any major autumn break to appear across the east just yet, they have headed out the gate instead of back with the ram.

Another price mechanism for mutton is export demand. March mutton exports were only 4 per cent lower year-on-year, compared to lamb which exported 20 per cent less compared to the March prior. For the year to March, Mutton exports are down 26 per cent, in line with sheep slaughter which has dipped 25 per cent for the year to date.  And as we mentioned in the March sheepmeat export analysis here, mutton demand has increased in some key markets which had taken less Australian lamb this year. For instance, the mutton exports to China for the year-to-March are up 58 per cent compared to the same period in 2020. This competition from China has made it more difficult for other markets to compete for our sheepmeat, according to Meat & Livestock Australia.

We could be coming towards the end of the major flock rebuild ‘buy-in’ phase, with enough time now having passed since seasonal conditions turned around, that in-flock growth is starting to flow through. While there is still enough money in mutton that producers can remain keen to trade out underperformers, buying in pregnant ewes might not be as attractive as it has been – especially if the predicted wet-winter comes to pass. 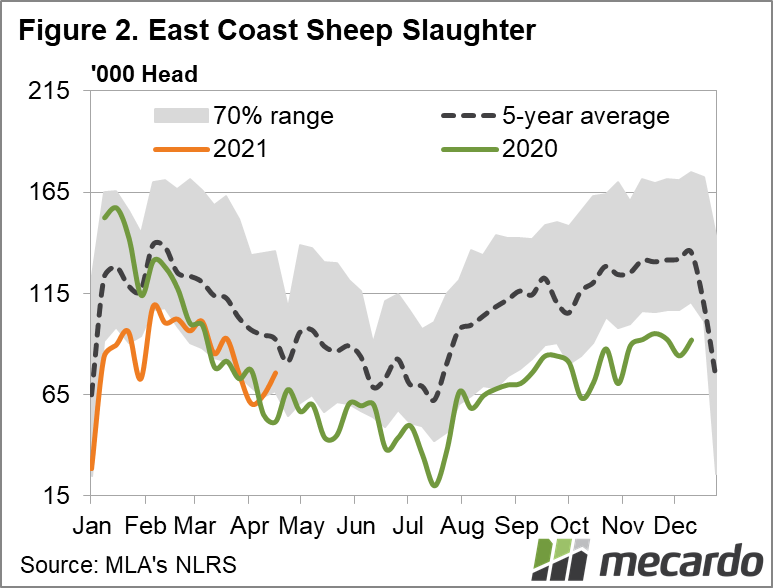