It has been 12 months since we last looked into live sheep export volumes, and the market has continued to shrink. In the calendar year of 2020, Australian live sheep exports fell to their lowest figure on record - below 1 million for the first time. Thankfully, this 27% drop in year-on-year volume only equated to a 9% dip in value due to higher sheep prices. So far 2021 isn’t seeing any uptick in numbers. For the year-to May, there were 31% fewer live sheep exported from Australia compared to the same period the previous year.

Live sheep exports for the year-to-May (latest data available) are 45 % below the five-year average. In fact, calendar year totals have been below that average since 2018, with the moratorium on live sheep exports to the Middle East from June 1 to September 30 coming into force in 2019. According to the Australian Live Export Council, the moratorium has eroded our market share in certain countries, and prompted our largest customer Kuwait to develop closer ties with South Africa. In positive news for the trade, live sheep exports are set to resume to Saudia Arabia for the first time in nearly a decade – a country that previously imported half a million head from Australia.

Kuwait however has still taken 58 % of all Australian live sheep exports for the year-to-May, compared to just shy of 25% of the 2020 total. In fact, numbers to Kuwait for the first five months of this year have already overtaken the total number sent in 2020. The UAE, while a much smaller market, has also nearly reached their 2020 total already this year, and has close to doubled their market share to 14%.

In comparison, trade to Qatar has completely disappeared since they removed the subsidy on locally slaughtered imported Australian sheep at the end of 2021. They made up nearly 35% of the market in 2017, and still represented 22 % in 2020. So far in 2021 however no live sheep have left Australia for Qatar. But Qatar’s imports of Australian mutton have climbed 80 % for the year-to-June, showing they are still looking for sheepmeat.

Domestic influences are also at play, with the flock rebuild, positive seasonal conditions and consistently high prices meaning a lot of live export eligible sheep are either being slaughtered here earlier or retained on-farm. In 2019, 97 % of all Australian live export sheep came from Western Australia, and in 2020 it was close to 99 %. However for the first time in at least a decade in 2020, interstate transfers of sheep from WA rose higher than live exports, and 2021 has continued this trend.

The diminishing live export trade had little impact on the national mutton indicator in 2020, and looks to have even less influence this year, with the NMI trading at 20% higher year-on-year. The WA mutton price has also remained firm, trending in line with the national price since the start of 2020. Increased sheep supply in Australia will no doubt highlight the need for the market to regain some momentum, but with the newly reopened Saudia Arabia and economic recovery from Covid-19 impacts, Meat and Livestock Australia is confident live sheep export numbers will grow from next year, rising 17 % by 2023. 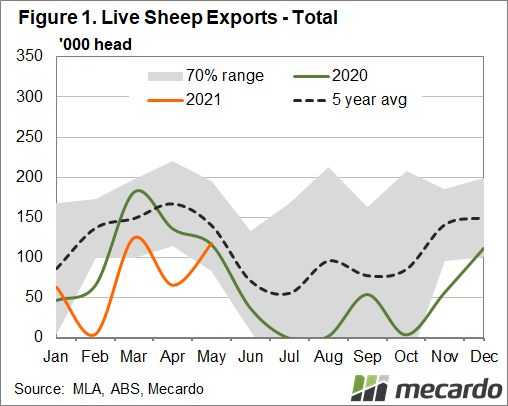