Supply drives prices in lamb markets, and with the release of Meat and Livestock Australia’s (MLA) projections last week we can take a look at both short and long terms supply outlooks, with a view to assessing price direction.

Earlier this week Mecardo looked at MLA’s price projections, and there has been a lift in lamb slaughter forecasts for this year, and in coming years.  MLA lifted the forecast for lamb slaughter in 2021 by 1.2% or 250,000 head.

The increase in the slaughter forecast came as July and August slaughter levels were much higher than last year, and the five-year average.  Figure 1 shows the Australian Bureau of Statistics (ABS) data up to June, and estimates of monthly slaughter for July to September, based on MLA’s weekly numbers.

After the lift in July and August, lamb slaughter rates in September dropped away, with supply of new season lambs slow, and Victoria under some Covid related restrictions.  While September slaughter is not particularly high on average, being one of the three lowest months of the year, it is unusual for it to be below July.

With MLA’s projections updated, we can estimate lamb slaughter for the remaining three months.  We take the 20.55 million head forecast, deduct what has been slaughtered for the first three months, and divided the remaining lambs according to normal seasonality.

Figure 1 shows that according to MLA’s total slaughter forecast supply from October to December will be very similar to last year.  In fact, slaughter is expected to be just 1% higher than last year.

Figure 2 shows how the 2022 lambs forecast slaughter of 21.8 million lambs will play out if it sticks to normal seasonality.  Lamb slaughter in 2022 is now looking basically the same as the five year average.

In terms of price the general expection is that rising supply in the last quarter of 2021 will see prices fall.  In 2022 the increased supply should see prices average lower, but it looks like they should remain strong.

Figure 3 shows our demand curve for lambs, that is, the price paid relatively to total annual slaughter.  The fact that prices in 2021 are going to average higher than 2020, despite stronger supply, is a clear pointer to stronger demand.  It also means that if demand remains steady, 2022 will see a average price around 800¢.

While lambs supply is on the increase, it is being more than matched by increasing demand, at least in 2021.  As we look forward to 2022 we should see prices fall, but that is assuming steady demand, and we have seen six demand surges in the past 20 years.

Even if demand is steady, an average price of close to 800¢/kg cwt in 2022 should still encourage increases in production, as lamb production remains a highly profitable business at that price level. 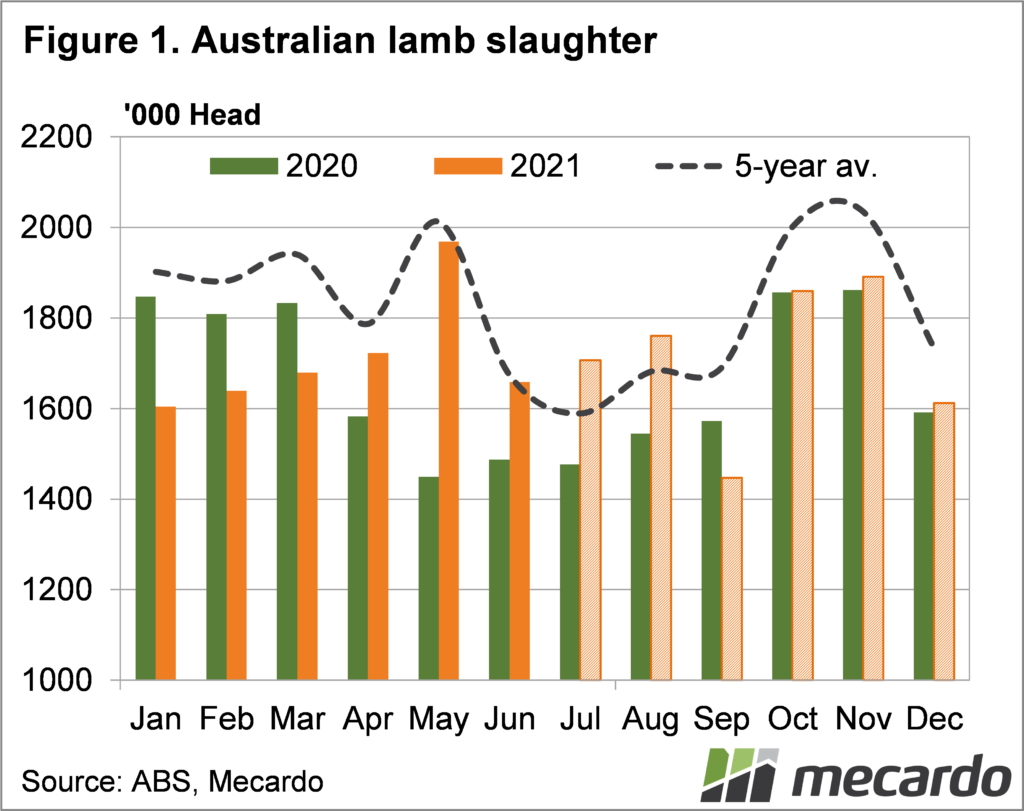