Should we be holding young cattle at record prices?

The current strong cattle prices may have many cattle producers and traders grappling with the question of “to sell” or “to hold” cattle in the paddock at the moment. With young cattle prices at record levels, and the Covid-19 pandemic looming large, the question is whether cattle should be sold now as stores, or taken through to export feeders in the summer, which was the likely original plan.

The question is a perennial one at this time of year, especially in good years. Do I take the good ¢/kg rates on offer now, or opt to put on more weight, given feed is abundant, and sell in summer when ¢/kg rates are usually lower. This year the spectre of Covid-19, and what it has done to lamb and sheep markets, is adding to the uncertainty.

Generally, there is little argument that the beast will be worth more in the summer, with strong spring growth rates adding plenty of weight. But the decision will come down to whether there is a more profitable way to use the grass grown, than putting weight on young cattle.

A typical scenario would start with steers currently weighing 300kgs. Calculating the current price is the easy part. Last week British bred steers around this weight made around 480¢/kg lwt.  Prices have never really been higher and this would return a very healthy $1440 per head.

The hard part is what they are going to be worth at Christmas, with an estimated extra 120kgs added.  Figure 1 shows the NSW Feeder Steer Indicator, which while being a domestic weight, is still a reasonable proxy for export feeders.

While there is nothing average about this year, in terms of cattle supply and demand, and the economy in general, some sort of seasonality should play out.  Over the last 10 years, the NSW Feeder Steer has fallen 2% on average from the first week of spring to Christmas.  The fall has been as large as 11% in 2016, but it has also risen, albeit marginally, in five out of 10 years.

Uneaten grass would generally be cut for hay in the absence of a more profitable trade, and the calculations are very rough, but give a general idea.  Let’s say each steer is going to consume 12kgs of dry matter per day, for 120 days, which equates to 1.44t of feed.  Not all of this could be converted to hay, so we’ll say instead of keeping a steer, we would cut 1t of hay.  A tonne of pasture hay is currently worth around $200/t ex farm, maybe a bit more but costs of cutting hay would eat into the profit.

The basic gross margin budget in figure 2 shows there is not much profit to be made  in adding 120kgs to steers over the next four months if the steer price falls 15%.  However, if feeder prices remain at record highs, or fall less than 5%, it is likely taking the steers on to 420kgs  will be more profitable, and less work, than selling them early and cutting grass for hay.

Recently there have been 250-300kg Angus steers sold on AuctionsPlus for 550¢/kg lwt, and at this money there is very little profit in this scenario, unless they are carried through past Christmas and to Heavy Steer weights. 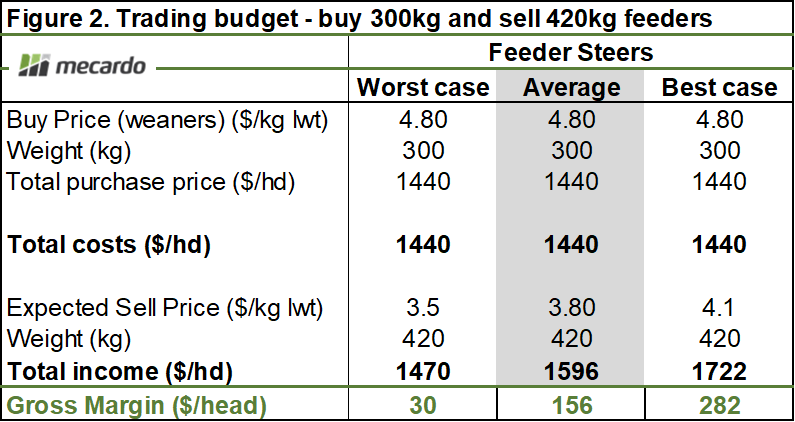