Both yardings and slaughter surged higher last week, and normally, we would expect prices to soften in response to this. This week, the Eastern States Young Cattle Indicator (EYCI) set another record of 1,033¢/kg on Tuesday. Robust demand continues to support prices, which is a very positive sign for the market’s outlook. The question is, how long can this buying pressure be sustained?

Yardings increased 25% last week, pushing offerings to 2% shy of the five-year average for this time of year. Slaughter rebounded 12% last week, reaching back over 100,000 head. We are still operating in a constrained environment though, where slaughter is 22% below average, which is contributing towards maintaining buoyant pricing levels.

The EYCI continues to consolidate its position on the high ground, breaking into record territory again for a brief moment on Tuesday, at 1,033¢/kg. Young cattle supply slipped back 4%, encouraging prices higher in general, and demand appears to have strengthened again in the north.

90CL frozen cow prices lifted 10¢(1%) to 817¢/kg swt, with both the weakness in the aussie dollar last week, and an underlying increment of 1¢ US per pound bringing prices higher. Steiner reports that product origin is of notable importance at the moment, with the spread between Aussie beef and product from Brazil widening of late because some large users are unable to buy Brazilian beef under their procurement standards. Uncertainty about product availability is also seeing some buyers lock in premium prices for Australian beef on a forward basis.

The Aussie dollar fell 0.4% against the US greenback to 0.727US. In addition, nervousness about the impending $400bn collapse of Chinese property developer Evergrande has helped the US dollar strengthen, and falling iron ore prices have depreciated the AUD.

The rain is moving further north over the next week, with central southern QLD set to receive a 10mm drink in addition to a big swathe of central NSW likely to get 25mm. Robust prices in cattle markets, despite higher supply last week points towards strong demand being in the air at the moment, so next week may be an example of more positivity. 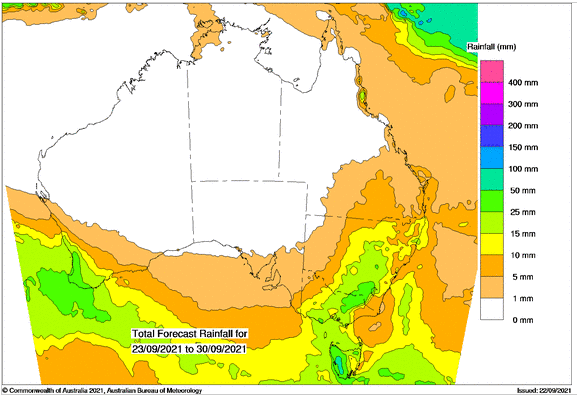