Typically we see a spike in slaughter in the middle week of January as processors ramp up to get lamb on the barbecue for Australia Day. This year, slaughter was a little light on, and has driven the market higher.

An extra 2,100 head (1%) of lambs were processed on the east coast in the week ending the 22nd of January, compared to the week prior. Without the normal hike in slaughter rates this year, the total number of lambs slaughtered in the first four weeks of the year was 24% below the five-year average for this period.

There was a lift in sheep slaughter though, with an extra 6,593 sheep (7%) processed in the east compared to the week earlier. If we were to point the finger somewhere for weaker supply it would have to be Victoria. The number of lambs slaughtered in the first four weeks of 2021 was 43% below the five-year average.

A 13% drop in yardings in Victoria also drove down the total east coast throughput for lamb and sheep. A total of 226,116 lambs were yarded in the east, which is a strong show for this time of year, 23% higher than the seasonal average.  The number of sheep in yards usually surges at the start of the New Year before falling, but the flow appears less volatile this year. Last week’s sheep yardings total was the closest to the seasonal average they’ve been in a long time.

Prices generally improved across all categories of lamb and sheep this week, except in Victoria interestingly, where results were a mixed bag of gains and losses.

The National Mutton Indicator also made up for last weeks loss, hiking back up to 603¢/kg cwt which puts the indicator 6% above the same time last year.

In some years the weaker demand in early February has led to weaker prices, but in years of weaker supply (2017), it’s been met with strong prices. The softening AUD may give export buyers some incentive, but Australian lamb is still looking expensive in any currency. 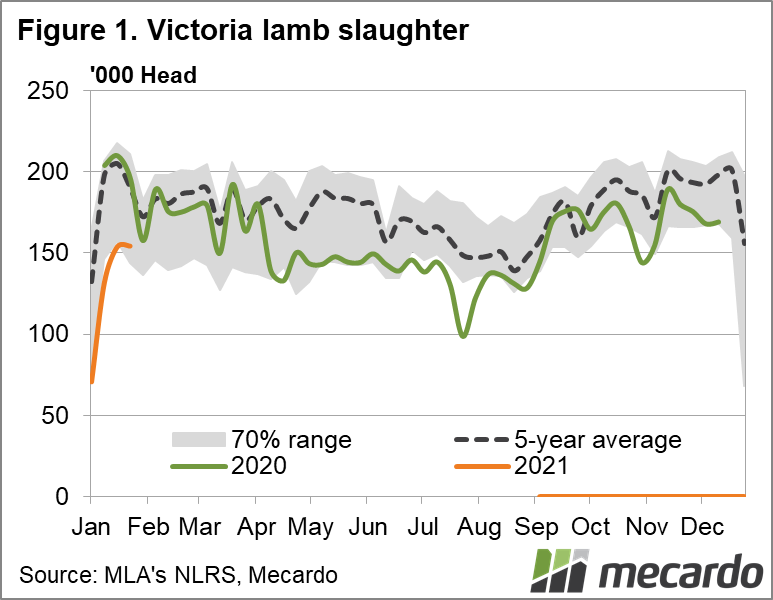