This week, slaughter has held it’s own, but despite tightening supply at the saleyards with yardings falling dramatically, the ESTLI continued its downward slide, with both trade lambs and restocks falling in value, while Mutton continued to resist the drag of the tide.

Lamb slaughter lifted slightly the east coast for the week ending the 14th of August (Figure 1), up 1% to 297,447 head, and 8% higher than the same time last year. Most of the increase was seen in SA, which lifted 10%, offset by minor falls in VIC and NSW. This figure is over 12% above that what we saw a month ago, with the increase primarily being driven by Victoria, whose slaughter numbers have risen 38%, from a low we saw in late July.

Sheep slaughter leaped 11% week on week, to 64,417 head, with the solid increase driven fairly equally across most states, adding around 2K head each, with QLD slaughter doubling, NSW up 8%, VIC up 10%; and SA showing a solid 42% increase.

Ovine yardings saw a huge decrease in numbers this week, with East coast lamb and sheep yardings falling off a cliff, in stark contrast to last week’s big rush, respectively down 21% to 118,217 and 35%; to 23,572 week on week. To put it in perspective though, total lamb yardings are only down 11% from late July and are 14% less than the same time last year. However, sheep offerings are well and truly lower, 30% lower than a month ago, and 52% less than we saw during the same period last year.

The Eastern States Trade Lamb Indicator dived 42¢ or 6% to 641¢/kg cwt, adding to losses consistently sustained over the last three weeks. The ESTLI has had a horror few months, having now fallen over 295¢ -32% from the heady level of 936¢/kg cwt we saw at the start of June this year, with over 170¢ of that loss occurring over the last month.

Across the categories, there were no bright spots among the continued carnage with both processor and restocker lambs diving in value. Trade lambs suffered the greatest falls, shedding 49¢ (-7%) to settle at 641¢/kg cwt, and light lambs fared little better, losing 49¢ (-7%) to end the week 641¢/kg cwt. Merino Lambs dipped 25¢ to finish at 608¢/kg cwt

National Mutton Indicator continued to show relative stability only sacrificing 12¢ (-2%) to finish up at 524¢/kg cwt on Thursday. If we look back a little, Mutton has resisted gravity somewhat for the last few weeks since it’s last major correction earlier this month, but it is a long way down (-22%)  from the high of 674¢/kg cwt we saw in mid-June this year.

Uncertainty continues, with producers holding off coming to market. Despite Victorian slaughter numbers holding their own, they are still of great ongoing interest.  We are yet to see how the industry will continue to adjust to the impact of JBS’s Brooklyn closure and the impact of COVID-19 processing restrictions. This is of special interest now as the spring lamb season is yet to ramp up, at which time VIC processors, as well as other states will need to increase production considerably to keep up with supply. 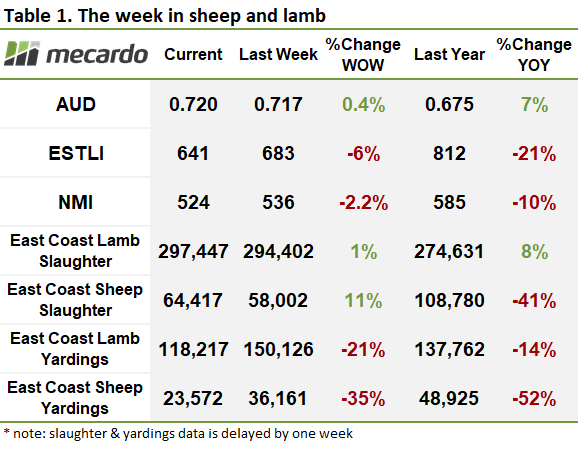