In December Mecardo concluded that slaughter numbers remained low in relation to the flock size, indicating a continued push by farmers to expand the sheep flock. The key unknown was, and remains, how much of the flock expansion would be into meat sheep. John Francis from Agrista notes that costs for prime lamb producers have tracked upwards over time, so that higher prices are not being reflected in higher profit margins. It is an important point as it is ultimately profitability which will underpin changes in enterprises on farm.

Since looking at sheep and lamb offtakes last December, rates for both have remained low. The adult sheep offtake, shown in Figure 1, remains under 8% and has been for the past year. This exceeds the 10 months which the sheep offtake remained below 8% in 2011-2012. It is the longest the sheep offtake has remained below 8% since the mid-1980s when sheep numbers climbed rapidly. This continued low rate of adult sheep sales to abattoirs indicates that older sheep are being held back to help build numbers.

Figure 2 shows the lamb offtake from 2008 onwards, along with the Australian flock size. The lamb offtake peaked around 33%, give or take a percentage point, between 2015 and 2020. In the past two years it has dropped from 33% to 28%, again presumably primarily as a result of farmers holding some young sheep back to help build numbers.

Figure 3 combines the sheep offtake with the year on year change in the lamb offtake, running from 2008 onwards to March 2022. The combined numbers reinforce the view that slaughter numbers are being held at low levels in order to build the flock size. This type of analysis is subject to error from varying weaning and death rates, and also the estimated flock size which is the denominator for the offtakes percentages. Even in allowing for some error from these sources the consistently low level of slaughter in the past year in particular (keeping in mind these are rolling 12 month averages) paints a positive picture for sheep numbers.

The flock looks to be continuing on an expansionary path given the low offtake of sheep and lambs. The next big test for this flock expansion will be spring seasonal conditions in the southern sheep regions later in 2022. Until then the expansion rolls on. 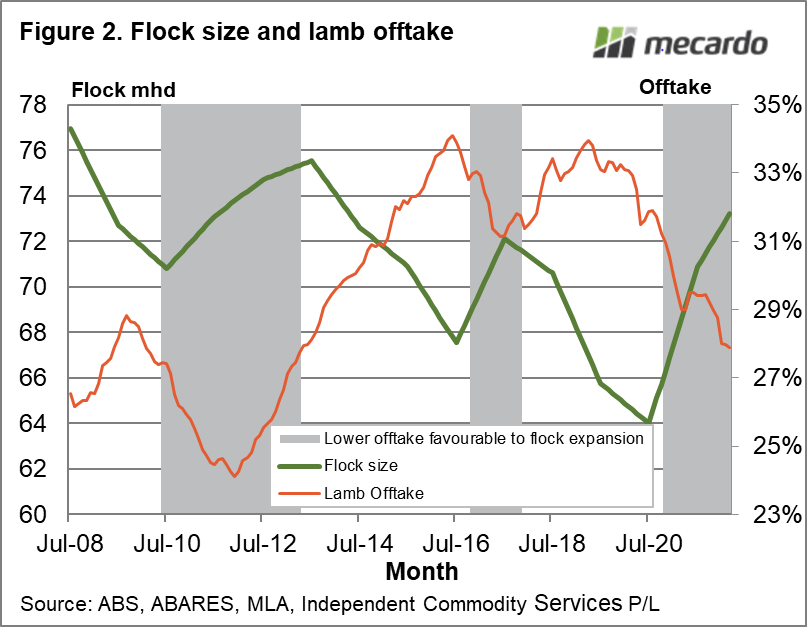 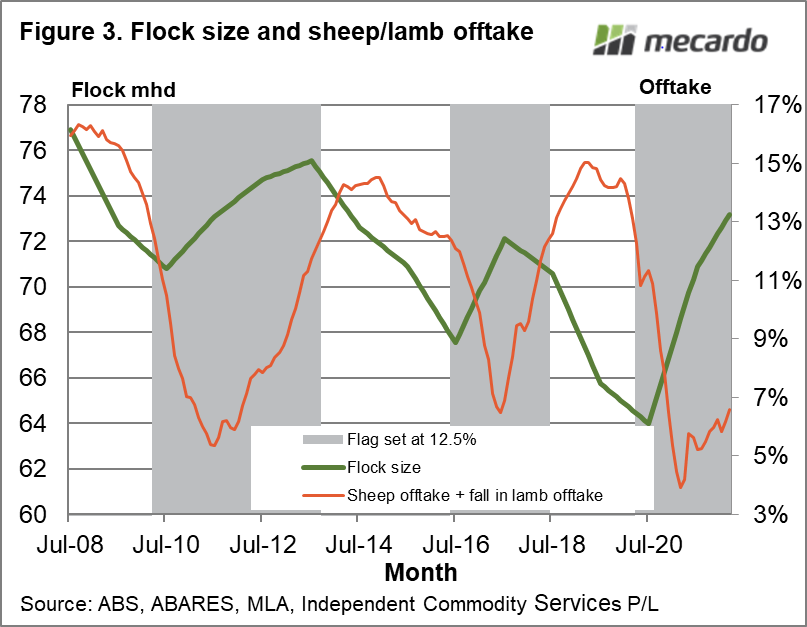