Cattle slaughter went down down down last week, with the lack of supply continuing to support prices. Eastern states cattle kill fell 17 per cent for the week to 97,793 head - a 30 per cent dip year-on-year. To put this figure into perspective, there is no week in August with below 100,000 head slaughter totals for the past 20 years. In fact, the only weeks in the past 20 years that have fallen below the 100,000 mark were either in the December/January holiday period, over the Easter break, or in just one instance the week of Australia Day.

If we look at the figure state by state, it was Queensland that experienced the biggest decline in slaughter numbers week-on-week, processing 28 per-cent less than the week prior. This was 39 per cent lower year-on-year. Compared to 2019, however, it was Victoria that took the biggest tumble, with 41 per cent less cattle crossing the kill floor, as the processing restrictions and JBS Brooklyn closure came into effect. NSW slaughter climbed for the week, up 8 per cent, but was still a significant 14 per cent lower year-on-year. South Australia and Tasmania were above year-ago levels, but with both State’s still processing less than 5000 head, it did little to impact the overall numbers.

Yarding’s were obviously in the same boat, with just 26,880 head sold in the east – 46 per cent less than the same week in 2019. The last time that few cattle were yarded (again, excluding the big holiday weeks) was October 2017. All in all, it is pretty clear cattle supply – or the supply of cattle producers are willing to part with at least – is at historic lows. And with more rain across parts of the east this week, the national herd must be getting closer to rebuild, which will push lower the female slaughter percentage.

This supply factor is supporting the historically high prices, which have held firm this week. The Eastern Young Cattle Indicator lifted 15¢ on the week to 778¢/kg yesterday. Feeder steer indicators in the east picked up 6¢/kg on the week prior. For the past two weeks, the national heavy steer indicator has been trading at its highest levels since its peak in June. This couldn’t be sustained in this week’s market, with heavy steers losing 31¢.

The strong dollar and plummeting production, not to mention global economic recession, must have an impact on Australia’s beef export markets – but it is hard to say if it will be sooner or later. Domestic influences alone are currently dictating the cattle market, but with 60 per cent of product headed overseas, external pressure must come into play eventually. 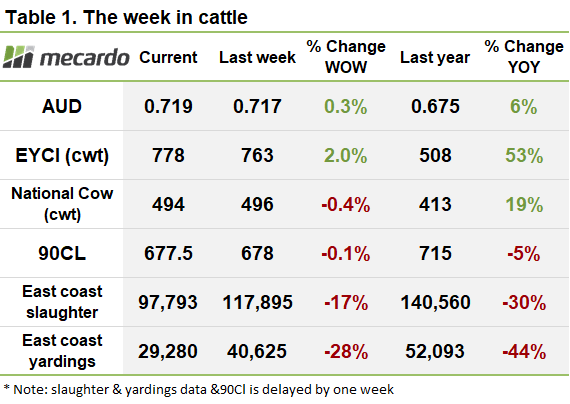 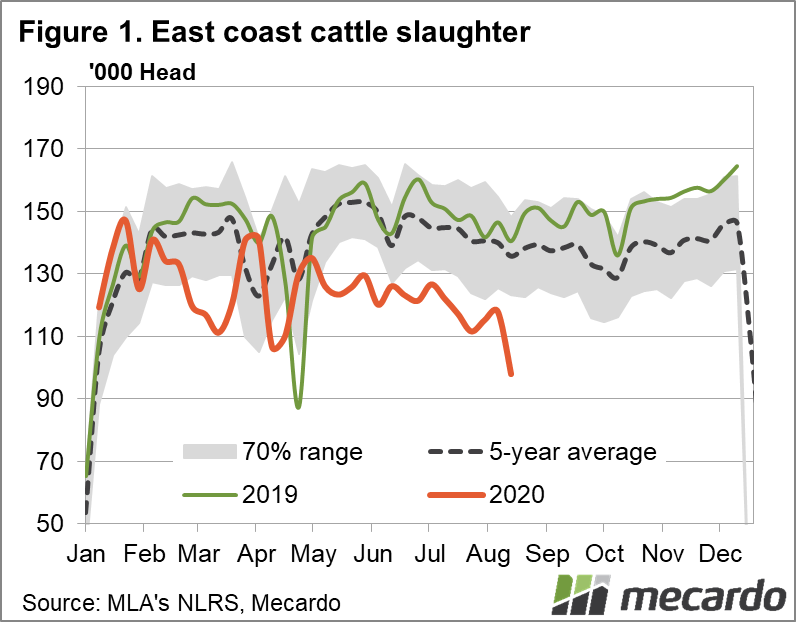