We’re rounding to the typical peak period of lamb yardings and slaughter, but the numbers still haven’t broken above the unseasonal high in supply we saw in October. Those with stock to sell are reaping the benefits with prices broadly healthier this week.

East coast yardings pushed higher again last week, no surprise given the prices on offer. Lamb throughput was over 250K, although this was still lower than the recent high seen in mid-October. It was also still 6% under the five-year seasonal average. Numbers continued to decline in NSW, while in Victoria, lamb yardings were 20% higher than the week before.

Sheep yardings on the east coast were 15% lower than the week before thanks to big drops in volumes in Victoria and NSW.  Slaughter numbers for the week ending the 4th of December were also lower week on week.

Lamb slaughter continued to trail 10-12% behind the five-year average. East coast slaughter volumes have been edging lower for the past month now. Last week slaughter was just 1% lower than the week prior, but 9% below the numbers of the same time last year.

The Eastern States Trade Lamb Indicator (ESTLI) gained 12¢ on the week to 770¢/kg cwt. The spread between NSW and Victoria is about 45¢ which is close to levels this time last year.  Trade lambs held firm in the west, with just a 1¢ drop to 673¢/kg cwt. Heavy lambs continued their run up to end at 762¢/kg cwt. The National indicators for Restockers, Merinos, Heavy and Trade lambs all gained 11 – 16¢ on the week prior. Light lambs were the only category to come off softer in all states, particularly in Victoria where prices lost nearly 50 cents.

Mutton prices continued to pull back, loosing 14¢ to end the week at 602¢/kg cwt.

As reported by Angus Brown earlier in the week, lamb slaughter for the financial year to November hasn’t been far behind last year’s levels, which means it’s not likely that we will see a big flush of lambs appearing in the New Year. What happens with prices will depend on how many processors are booked up over Christmas/New Year, but the rain on the forecast will help. 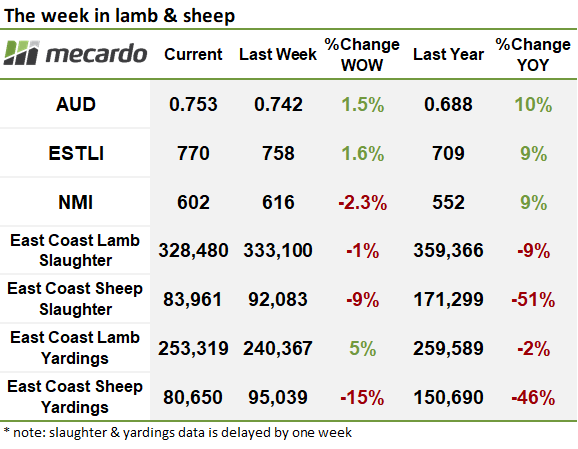 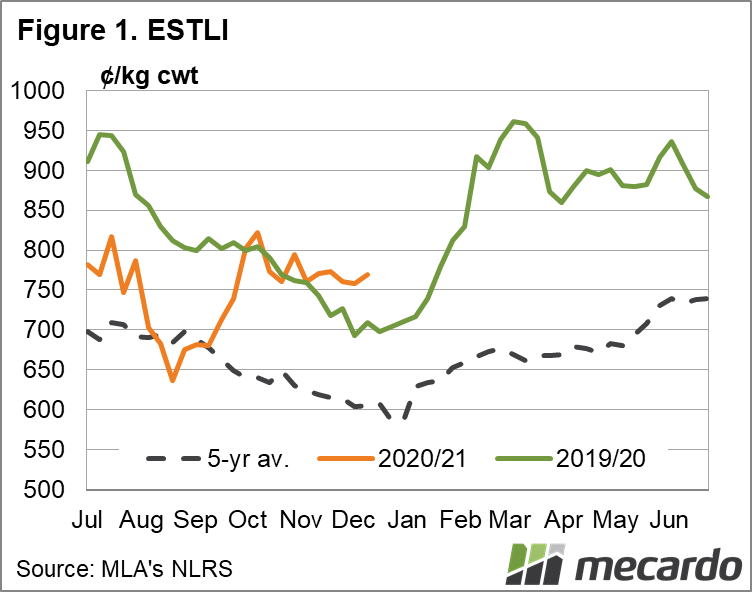 Restocker lambs have opened the year as one of the hottest commodities, surging higher as producers, feeders and processors compete for whatever livestock they can

What a strong start to the new year for Sheepmeat! All categories of lamb and mutton set into 2021 much higher than where they left

More Merinos and fewer ‘other’ will support lamb prices

Most of Australia’s lambs are born in late winter or early spring, hence the importance of the numbers we get out of the AWI/MLA Wool