A short week in Victoria saw lamb slaughter plunge to its lowest weekly total since April. New season lamb numbers in the state are slowly lifting though and sold into a week of quite mixed results between states and categories.

Weaker lamb yardings in all states last week saw east coast throughput drop 11% from the week prior. Despite the fall, lamb yardings were 10% above the five-year average and just 2% higher than the same time last year. In Victoria, yardings continue to track below last year’s levels, indicating that new season lambs are a few weeks behind last year in some areas. MLA reported that in Bendigo young unshorn lambs are making up around 90% of yardings.

For the week ending the 24th of September, just 274,096 lambs were processed in the east. This was 14% lower than the five-year seasonal average. While weekly slaughter rates are showing that NSW is processing more lambs than usual for this time of the year, it’s not making up for weaker slaughter rates in Victoria and South Australia.

Sheep yardings were also lower last week, falling 19% on the week prior. As reported by Jamie-Lee (view here), saleyard sheep supply has been above year-ago levels since July, and with the National Mutton Indicator adding another 14ȼ this week to 641ȼ/kg cwt, there’s very good money for mutton. Sheep slaughter continues to climb, following the normal trend up out of winter.

On the lamb price front, the Eastern States Trade Lamb Indicator gained just 1ȼ on the week to 943ȼ/kg cwt. In the West, Trade Lambs came into a stronger market, with the indicator lifting 19ȼ to 756ȼ/kg cwt.

In NSW most categories ended the week softer, with light lambs shedding 40ȼ and heavy lambs 19ȼ, but trade lambs held firm. Results were similar in SA, however, restocker lambs were the clear laggard, losing 70ȼ on the week to 982ȼ/kg cwt. In Victoria it was only heavy lambs that lost ground, easing 8ȼ to 961ȼ/kg cwt, which remains the most expensive category in the state on a carcase weight basis.

The Aussie dollar softened again this week, transiting below 0.720 USȼ briefly on Wednesday before edging back to 0.723. This will only help to fuel what is already very strong demand in our lamb and mutton export markets. Whether we will have the processing capacity to fulfil that demand is the unknown part of the story which is yet to play out. 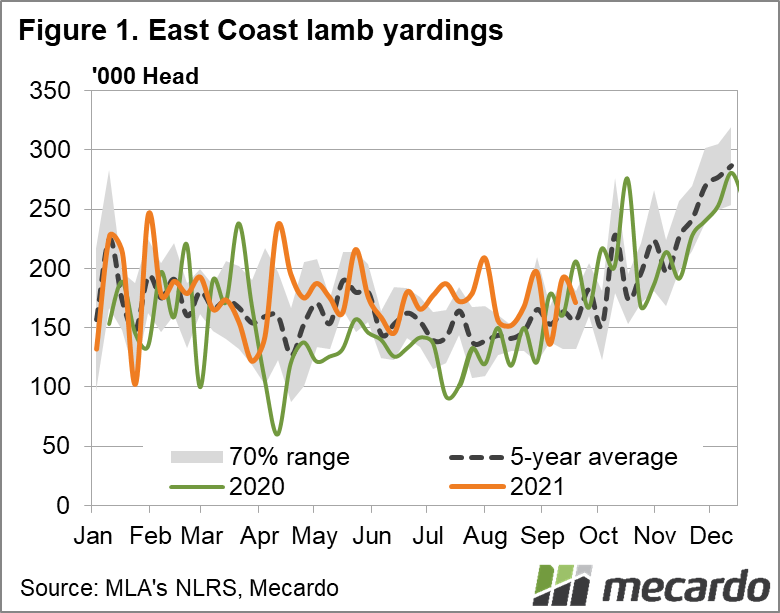