The Eastern States Trade Lamb Indicator (ESTLI) dropped 18¢ this week, landing at 775¢/kg cwt. The ESTLI is currently sitting 67¢ below the same time last year. In WA, finished lambs are still struggling to find a foot hold, with trade lambs losing another 20¢ to 770¢ and Heavy lambs down 22¢ to 759¢.

The store lamb market found some momentum in NSW in Vic. Restocker lambs in NSW gained 12¢ and in Vic 19¢, but the spread between the two states remains large. Restockers in NSW were on average paying 88¢/kg cwt more than in Victoria this week. Merino lamb prices pushed higher, with the National Indicator increasing 15¢ to 696¢. However, this isn’t enough to recoup the losses in the week prior.

The National Mutton Indicator lifted 8¢ to 562¢/kg cwt this week. With mutton around 19% cheaper than the same time last year, it’s a hard pill to swallow, considering slaughter has been lower or close to 2021 levels for most of the year to date. However, as Angus mentioned in this week’s analysis “prices are by no means disastrous”.

For the week ending the 1st of April 192,214 lambs were yarded in the east coast, and just 3,950 in the west. We know the issues plaguing supply chains in WA, and these are reflected in throughput.

In positive news, weekly slaughter remained at the top end of its recent range in the week ending the 1st of April. 336,459 lambs were processed in the east which is just 1.4% shy of the week prior.

The backlog of lambs aren’t going to be processed over night and until they are worked through and labour capacity issues in the processing sector are addressed, we’re unlikely to see any major turn around. Rain is always good fuel for the store lamb market, however it’s the finished market sets the base. 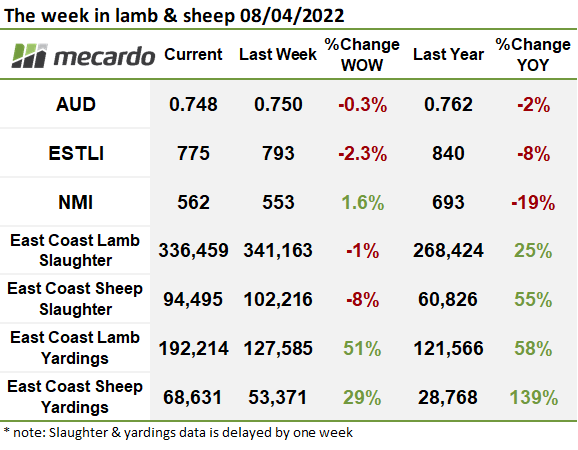