AWI reported the first day of selling had buyers operating in an atmosphere “devoid of confidence”, which despite a weaker Au$ saw prices fall. However, this turned around significantly on the final day of sales. Buyers pushed to fill overnight orders initially lifting the market 10 – 20ȼ and then proceeding to support the market resulting in it closing at its highest level at the end of the day.

The Eastern Market Indicator (EMI) gained 17ȼ for the week to close at 1,341ȼ. The Australian dollar continued to fall, this week by 0.5 cents with the US/Au rate quoted at US$0.721. The EMI in US dollar terms was up slightly, lifting 5ȼ to settle at 967ȼ.

The strongest performance came from the fine merino section, with the Melbourne 16.5 MPG gaining 62ȼ, while the 19 MPG lifted 33ȼ and the 21 MPG gained 14ȼ.

Fremantle posted a marginally positive result across the board, although the range across the MPG’s was only -1 to + 5ȼ. AWEX reported the Western Market Indicator (WMI) lifted a further 8ȼ cents to 1401ȼ. Fremantle sold 6,405 of the 6,829 bales offered with a low 7.5% of offered bales passed in.

The crossbred indicators remained steady for consecutive weeks, with the 28 MPG quoted down 2ȼ while the 30 MPG remained unchanged.

Cardings continued to perform strongly, with gains in locks, stains & crutchings prices lifting 10 to 20ȼ. This pushed the regional cardings indicators all higher, with Fremantle up 21ȼ, while Melbourne gaining 8ȼ and Sydney lifting 12ȼ.

The heavy rainfall across much of the wool growing area will cause grass and burrs to now grow into the summer season. On Mecardo this week (view article here), Andrew Woods looked at the level of Vegetable Matter (VM) we can expect going forward. Previously, Mecardo looked at the seasonal patterns in VM levels, which showed VM levels generally reach seasonal lows, late in the calendar year. With VM levels still elevated in eastern Australia, this will mean that VM levels will begin to rise in 2022 from a relatively high base. This implies that VM discounts will continue to be substantial in 2022.

Next week an increased offering of 41,499 bales is listed for sale in Fremantle, Melbourne & Sydney with all centres selling on Tuesday & Wednesday. Sydney is a designated superfine sale. 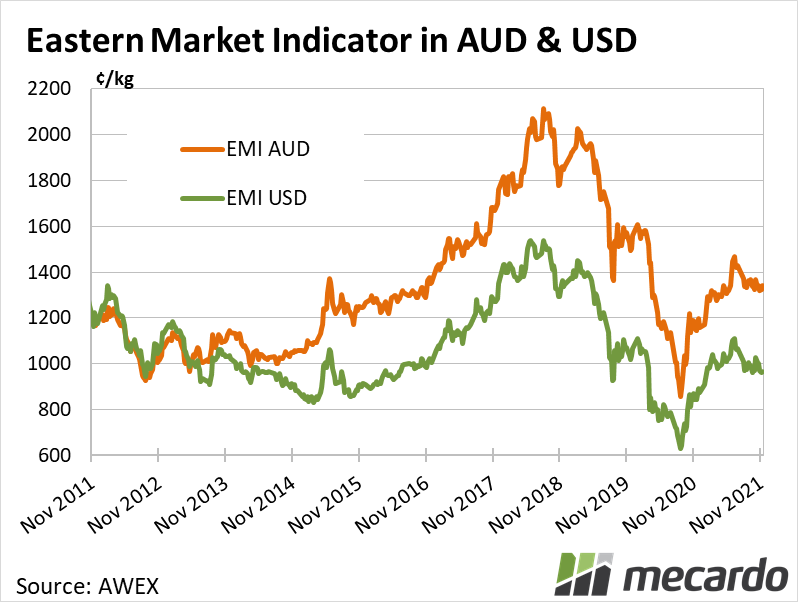 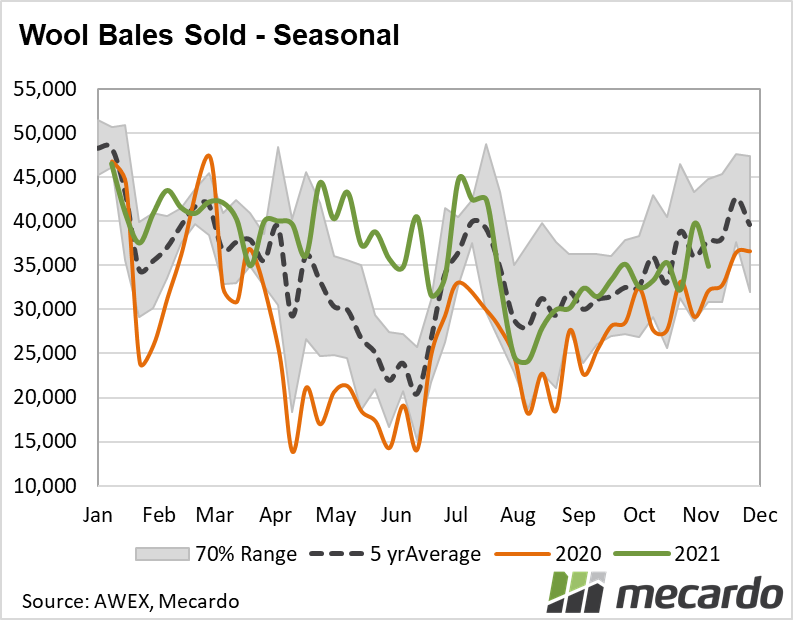