Snakes and ladders for lamb and mutton

The lamb and sheep market is in an interesting space at the moment. Lamb prices are defying norms, even with a large lift in throughput in NSW and Victorian producers also sending plenty of numbers in. Mutton couldn’t hold it’s position for another week however, and prices slipped.

The Eastern States Trade Lamb Indicator gained another 15ȼ this week to 945ȼ/kg cwt, returning to the level of a fortnight ago. It was NSW and SA which drove the price lift in trade lambs, with prices softer in Victoria. The Western Australian Trade Lamb Indicator also lifted, up 12ȼ to755ȼ/kg cwt.

Heavy lambs continue to test their limits. The National Heavy Lamb Indicator rose 21ȼ to 966ȼ/kg cwt this week. In NSW heavy lambs are fetching 20ȼ more than trade lambs on a ȼ/kg basis, while in Victoria it’s closer to 90ȼ.

Store lamb prices also increased in most states this week. Restocker lambs in Victoria were the exception, falling 62ȼ on the week to 928ȼ/kg cwt.

It was mutton that fell off its price perch. The National Mutton Indicator (NMI) lost 57ȼ over the week to end at 615ȼ/kg cwt. The last time the NMI was close to this price level was back in April. The lack of interest in sheep appeared to be across the board, with significant price drops in all states.

For the week ending the 3rd of September, lamb yardings lifted 18% in the east to see a total of 196,868 yarded. Throughput increased in most states, including SA where an additional 3,641 lambs came forward, compared to the week prior. East coast lamb throughput continues to track above five year seasonal average levels, and well above last year.  Sheep throughput also increased last week, up 32% on the week prior. With 68,968 sheep yarded in the east, this was 7% more than the five year seasonal average.

Lamb slaughter was 2% lower last week than the week prior, and 4% below the same time last year. The number of sheep processed last week also declined, by 4% compared to the week prior. NSW was the big driver with 9,527 fewer sheep processed compared to the week earlier. Some of this was offset by Victoria though where an additional 4,181 sheep were processed.  Looking at Figure 2 though, it’s clear that slaughter isn’t heading in the normal direction.

It’s watch and see for the market at the moment. Lamb slaughter ramps up at this point in the year but the last few weeks have seen processing space tighten up. How long Melbourne processing restrictions are in place and the impact of a lack of seasonal processing workforce more broadly are unknowns, but it feels like just a matter of time before it begins to pinch. 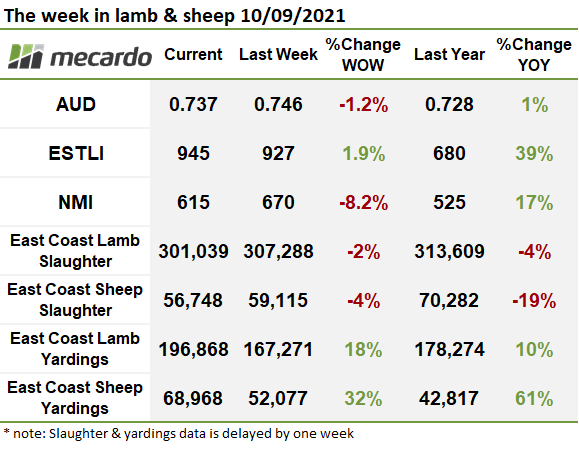 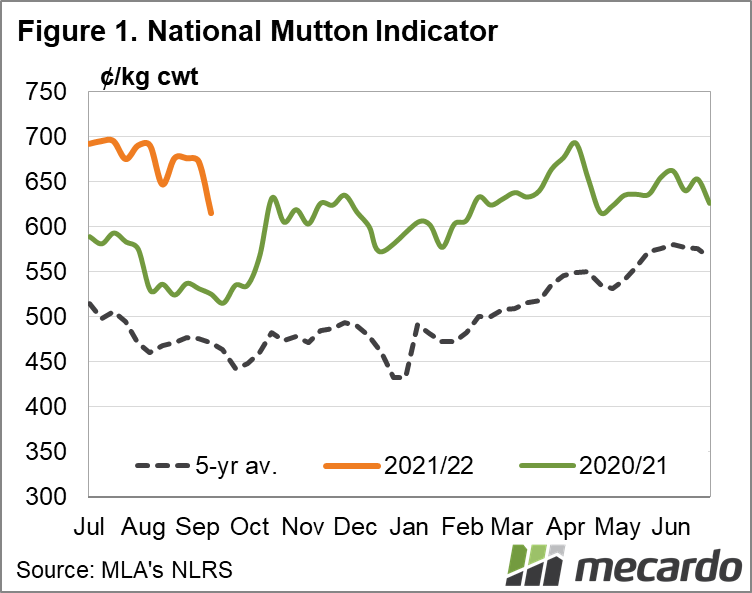