Snap turn in the market

It looks like the winter price peak is behind us now with the lamb market taking a quick turn south in most regions. Mutton is holding its own though, as tight supply sees any stock snapped up.

The Eastern States Trade Lamb Indicator lost 34ȼ to end the week at 890ȼ/kg cwt. Despite the fall, this is still an impressive 187ȼ higher than the same time last year. In the West, trade lambs also felt the pinch, dropping 12ȼ to 754ȼ/kg cwt.

South Australia was the only lamb market to avoid widespread price falls. Restocker lambs in SA improved 117ȼ to 928ȼ/kg cwt, making them the most expensive restocker lambs in the country this week. In NSW, Restockers dropped 103ȼ to 917ȼ/kg cwt and in Victoria dropped 35ȼ to 867 ȼ/kg cwt.

East coast lamb yardings increased 4% to see 178,575 head yarded for the week ending the 30th of July. An extra 13K head were yarded in NSW compared to the week earlier, with new season lamb numbers picking up. This offset fewer numbers in SA and Victoria. Western Australia also saw lower lamb throughout, with 6,634 lambs yarded for the week.

Sheep throughput numbers in the east were largely unchanged on the week prior. They are still tracking at about 20% below five-year average levels.

East coast lamb slaughter increased 2% on the week to see 308,614 head yarded last week. This was 8% higher than the same week last year and 6% higher than the five-year seasonal average. Sheep slaughter dipped by 2% for the week ending the 30th of July.

As Angus Brown reported this week (view here) lamb supply through the spring is expected to be higher than last year and there are concerns about processing capacity constraints during peak supply. The price impact will depend on how spring rainfall shapes up.

The Aussie dollar improved on the week, but Is still hovering at very low levels of around 0.74 USȼ. This has aligned rather well with the seasonal peak in price, and should be supporting Australian sheepmeat demand into our overseas markets. 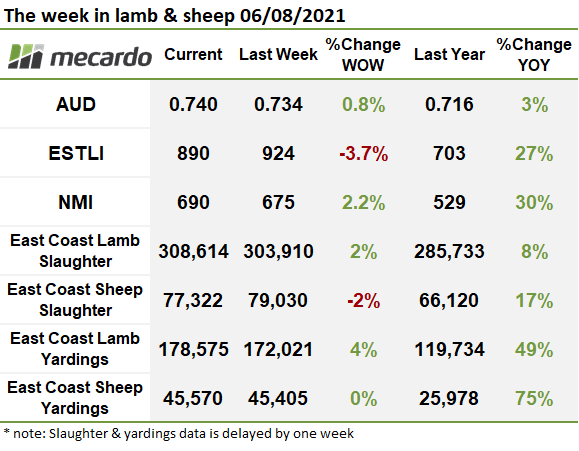