An abundance of rainfall and green grass is keeping Australia’s cattle herd rebuild on-track, with the latest industry projections from Meat and Livestock Australia estimating numbers to reach 26 million head in 2021. (figure 1) This will keep a lid on slaughter for the remainder of the year at least, however, when you team this tight supply with an expected “best spring in recent memory” (MLA), and global economic recovery, there are very few factors pushing domestic cattle prices down in the short-term.

Average carcass weights have surged higher, according to MLA, with the estimate for 2021 now at 311.7kg, compared to the 301.3kg predicted in April. (figure 2) This is a lift of 11kg, and if it eventuates it will be a 6% higher year-on-year lift. There are a few things pushing cattle heavier at slaughter, the availability of feed on offer, and confidence in a continued good season due to already high levels of soil moisture, being an important one. Those who have bought young cattle at sky-high prices are keen to add as many kilograms as possible before turn-off, while breeders are weaning calves at heavier weights to begin with thanks to the season. The fact that just shy of half of all cattle slaughtered in the first quarter of 2021 were grain-fed, is also a factor (this figure is usually closer to 35-40 %).

Forecast cattle slaughter has fallen by another 100,000 head since April, to 6.3 million – which will be 12% lower than 2020 numbers, and the lowest level in 35 years. (figure 3) Those higher carcass weights are offsetting this slightly, however, with beef production forecast to now only fall 7% year-on-year, compared to 9 % predicted in April. And this production will flow on to beef exports, MLA’s forecast is 2 % up since the last outlook. Live exports are still facing challenges, however, with numbers now expected to fall by 29 % this year – but still forecast to regain most of that lost ground by 2023. (figure 4)

MLA have included an aggregated industry price forecast for the Eastern Young Cattle Indicator(EYCI) in its projections for the first time, using data from across the industry, including Mecardo. They forecast the EYCI (currently at 998.55¢/kg) will be down to 874¢/kg by the end of the year, with its upper range at 968¢/kg, and lower range at 809¢/kg.

The cattle industry is set to continue its purple patch for the remainder of the year based on these projections, especially if the BOM’s wet spring comes to fruition in beef production regions. But while beef exports are expected to climb back to above 2018 levels by 2023, the loss of market share while Australian prices are sky high and supply super low is something to watch – more on this next week. 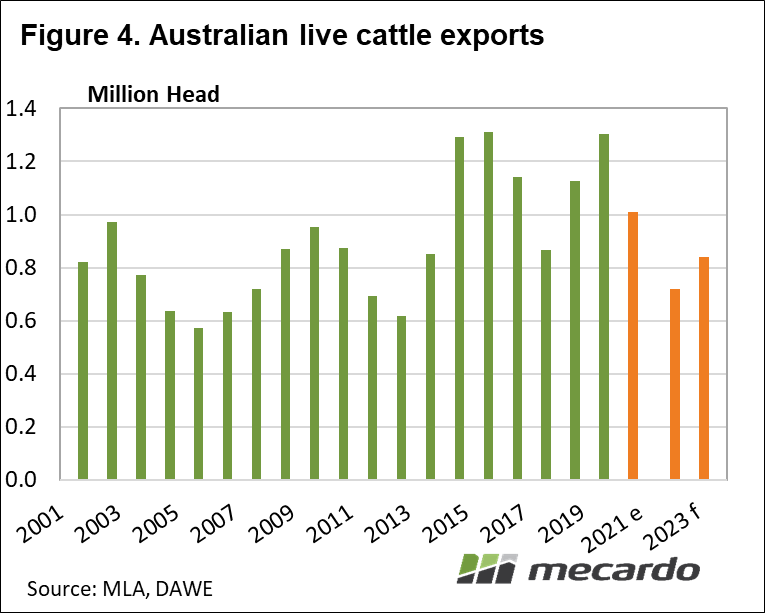