Fertiliser has joined the list of commodities like cattle, canola and mutton that have a record high price tag attached this year. For urea, prices have been high for most of this year and supply chains have risen to many challenges, but surging natural gas costs and export controls on urea in China are just some of the recent elements pushing nitrogen fertiliser prices higher and higher.

Last week, urea prices FOB ex NOLA were at $1,042/tonne in AUD terms, $710/tonne higher than 12 months ago (Figure 1). Even in the last month, prices have risen almost $250/tonne or 31%. While local retail prices in Australia are subject to additional factors of freight, and local S&D, global supply concerns and strong demand are impacting every market.

So what’s driving these prices? India and China are major determinants of nitrogen fertiliser supply and demand, however, there are a number of key global factors affecting the current price extremes and outlook:

1. Robust demand for nitrogen has been driven by high grain prices and increased acreage of nitrogen-intensive crops around the world, such as corn. Industrial demand growth has also been strong in 2021, driven by high economic growth and demand for industrial products.

2. Unplanned plant outages have caused short term supply disruptions this year, including the winter freeze event in the Southern US in February and Hurricane Ida which caused damaged nitrogen facilities in the US Gulf Coast in August.

3. Sea freight and container pricing is at decade highs. The Baltic Dry Index, a benchmark indicator for the price of moving major raw materials by sea, is currently 235% higher than the same time last year.

4. Continued increases in fertiliser input costs including European natural gas and Chinese coal are driving up the cost-based floor (Figure 2). While prices have traded above the cost-based floor throughout most of 2021, the natural gas crisis in Europe is pressuring nitrogen prices higher. Nitrogen production costs well-above current nitrogen prices have forced plant closures and is leading to the prospect of higher than normal imports into Europe.

5. Meanwhile in China, coal prices have rallied due to a shortage of thermal coal for power generation, which has limited urea operating rates despite high urea prices and exports have been further limited by strong domestic nitrogen use as China prioritizes increasing domestic food production. In order to keep domestic urea prices lower than global market levels, the Chinese government is also imposing strict export controls, which will likely reduce exports in the coming months.

6. India remains dependent on imports for their domestic needs as a good monsoon season has provided optimism for the ‘Rabi’ crop (Figure 3). India, Brazil and the US have had to compete strongly for available supplies in recent months.

The international ‘demand season’ for fertilisers has only just begun and prices are rising at an unprecedented rate. While the situation in China is a rapidly evolving and uncertain situation, the restrictions could maintain a very tight global urea supply/demand balance through the middle of 2022. Urea prices are unlikely to head back to 2020 levels anytime soon. Note: Urea US gulf prices have been converted to Australian dollar terms and are indicative only of global prices. They do not take basis into account and so do not represent local retail prices. 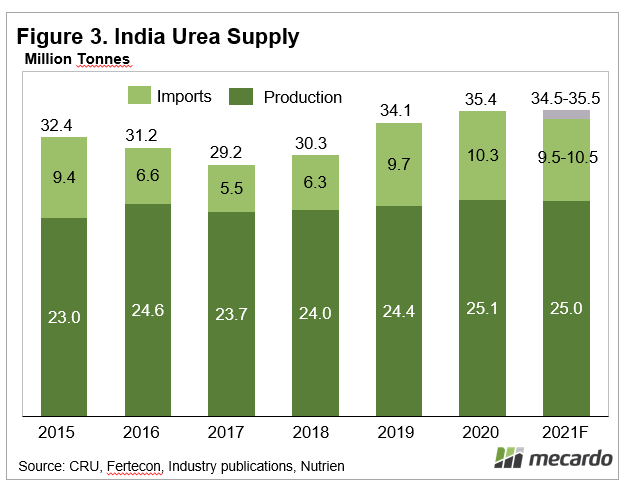