The final sale before the traditional three-week recess produced a solid result. The national offering remained large as growers responded to recent stronger prices and the last chance to sell before the break.

The west was again the strong market, with the Western Market Indicator (WMI) lifting by 20ȼ to finish at 1462ȼ.

For the second week of the new season, a large offering was again on the table, which isn’t unusual for the new financial year. 49,003 bales were offered, with a pass in rate of 13.4%, leaving 42,441 bales sold. The first two weeks of the 2021/22 season has seen on average just under 10,000 bales per week more sold compared to last year.

Again, it was the medium microns that generally outperformed the finer end of the wool clip. With Melbourne only selling on the final day last week where it performed strongly, Fremantle and Sydney quickly picked this sentiment up with strong early performances.

After the correction between selling centres was made, the market for 19 to 20 MPG showed slight improvement, however other MPG’s all eased compared to previous week, with the 16.5 MPG most impacted dropping 83 cents.

This week the crossbreds were the star performers, picking up all of last week’s fall to post gains of 24 to 60 cents. Notable the 28 MPG was up 60 cents in Sydney and 41 cents in Melbourne.

Cardings moved up 11ȼ in Melbourne but fell by 11ȼ in Sydney with Fremantle adding 2ȼ for the week.

This week on Mecardo, Andrew Woods looked at the sheep and lamb offtake data.

From the sheep and lamb offtake data it appears the flock expansion is on track to continue (view article here). For wool supply, the weakness in this analysis is that it does not tell us what breed of sheep is being added to the flock.

The wool auctions now begin a three week recess with sales set to resume in the week beginning 9th August. 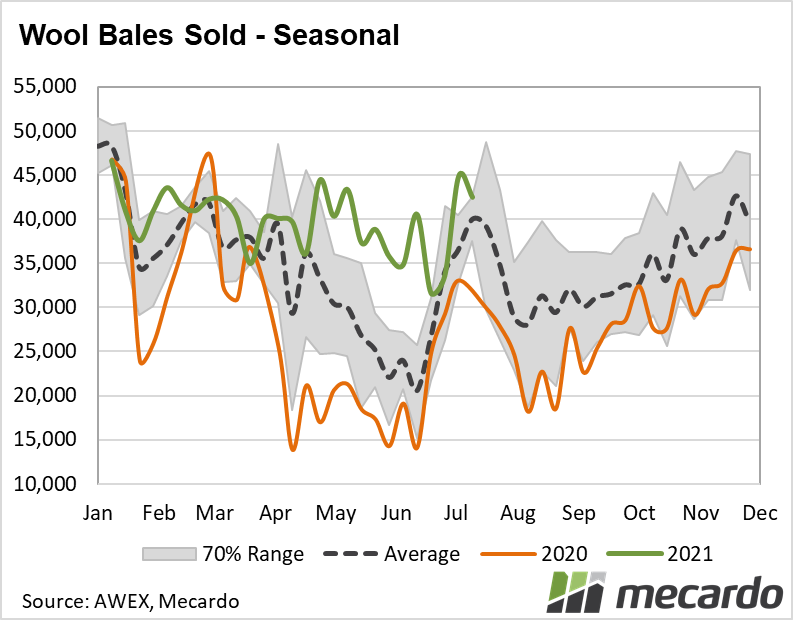