South America represents one of Australia’s largest competitors on the world stage for beef exports, producing predominantly lean, grass-fed beef, which competes directly with us for common export markets, including China. Brazil, Argentina and Uruguay represent the most significant cattle producing nations in South America, and as a group are estimated to maintain a cattle herd in excess of 310 million head in 2020.

Brazil’s herd has grown strongly over the last 20 years, (Figure 1) from less than 150 million head in 2000, to an estimated 244 million head in 2020 which is a total rise of around 67%. Since 2016 alone, Brazil’s herd has expanded by around 25 million head, which is over 11%. The driver behind this has largely been strong export demand, mostly emanating from China, but also supported by improving domestic demand. Much of the recent growth in Chinese exports can of course be attributed to the animal protein deficit caused by African Swine Fever.

According to the USDA, Brazilian beef exports to China have risen from 0% of total exports in 2014, to close to 30% in 2019, and have been tracking at 45% for the first half of 2020. Sanitary and safety issues have been a significant problem for Brazil’s export market access. In 2012, China and various other countries imposed a ban on Brazilian beef imports when BSE, or mad cow disease was discovered in Brazil, which China subsequently lifted in 2015. Brazil’s market access to the US is limited by a 60kt quota, which it shares with other smaller south American Nations.

Argentina’s cattle herd has not seen the steady growth that Brazil’s has, only booking a ~9% increase since 2000 from 50m to 54.5m head (Figure 2). Despite this, export volumes have more than doubled over the same period, and quadrupled following a collapse that occurred in 2010 as a result of export quota controls imposed by the government in an attempt to reduce the price of beef for the local population, which is a politically sensitive topic in the country. Those restrictions were lifted in 2016 when a change of government occurred, with exports rising strongly as a result.

The USDA estimates that 75% of argentine beef exports for the first half of 2020 were destined for China, which is in line with the trend seen in 2019. The EU represents the second most significant destination, but these are restricted by limits imposed by the 29.5Kt Hilton quota and the high quality beef quota (HQB) of ~37kt. Argentinian market access to the US is limited by a 20kt quota, which is expected to be filled in 2020 for the first time.

Similar to Argentina, Uruguay’s herd has expanded by a total of around 9% from 2000 levels to sit at a current 11.5million head for 2020 (figure 3). However, most of this growth occurred in the early to mid-2000’s where it peaked and has fluctuated substantially since.

Uruguay is a predominantly grass-fed production system that enjoys the benefit of being recognised by the OIE as being free of foot and mouth disease (FMD) by vaccination, which improves its market access. Uruguay’s cattle industry is considered quite mature, and a producer of comparatively high value beef, but its expansion is somewhat limited by land availability.

Export volumes have been relatively stable at around 400kt cwe for the last five years, with the largest growth in volumes coinciding with a significant herd expansion event back in 2002-2005.

China is the most important export market for Uruguayan beef, with USDA data indicating that China accounted for close to 70% of total exports in 2019, and in excess of 50% for the first half of 2020, The US the second most prominent destination, to where it exports trimmings and 90CL lean grinding beef.

South American countries collectively possess cattle herds in excess of ten times that of Australia, and export volumes, particularly out of Brazil are growing strongly. The increasing penetration of low cost South American beef into important export markets common to Australia such as China represent a growing competitive threat. 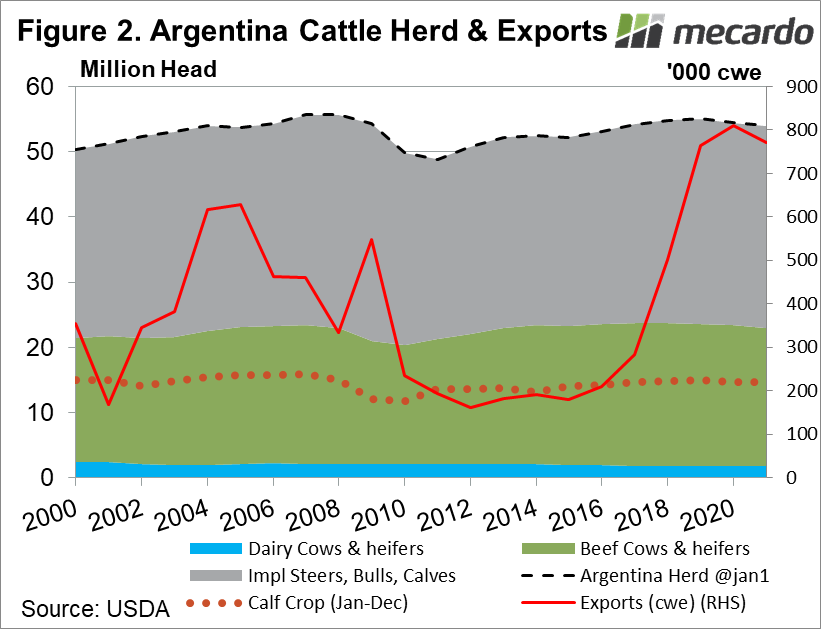