It has almost gone unnoticed, but November threw up some interesting figures for beef export markets. Supply continues to be tight overall, but the shifts in export destinations, while in line with seasonality, were much stronger than usual.

Regular readers will know that at the end of the day it’s beef export markets which drive Australian cattle markets.  While the focus is currently on grass and weak cattle supply, without the money from export markets prices would be much lower.

The November export data released by the Department of Agriculture Water and Environment (DAWE) showed some dramatic shifts in export volume in November.  Total exports were relatively steady, up just 1.85% on the October figure, at 75,712mmt, but it was in the detail where the interest lies.

The beef which didn’t go to the US was taken up by South Korea and Japan.  South Korean exports jumped by 22% on October, and 17% on last year, to record its highest total since November 2016, the only other time they have been higher.

Meat and Livestock Australia (MLA) have a good tool on their website for tracking exports, and it tells us that most of the increase to South Korea, and decrease to the US, was in frozen grassfed beef.  The increase to Japan was largely frozen grainfed beef, which was diverted from the Philippines, one of the smaller markets.

The seemingly increasing demand from South Korea forced beef export prices higher for manufacturing beef in November.  Figure 3 shows the 90CL Frozen Cow export price to the US in both US dollar and Aussie dollar terms, and it has been on the rise.

With beef supplies relatively steady from Australia, at least on a national level, it is increasing demand which is again pushing prices higher.  This should be taken with some caution however, with the New Zealand Cow culling season not far away, some pressure could come on the manufacturing beef market, which appears to be driving the beef export market in general.

Regardless of this it is good for growers to see higher export prices, as it keeps a floor in cattle markets when the inevitable shift in supplies comes. 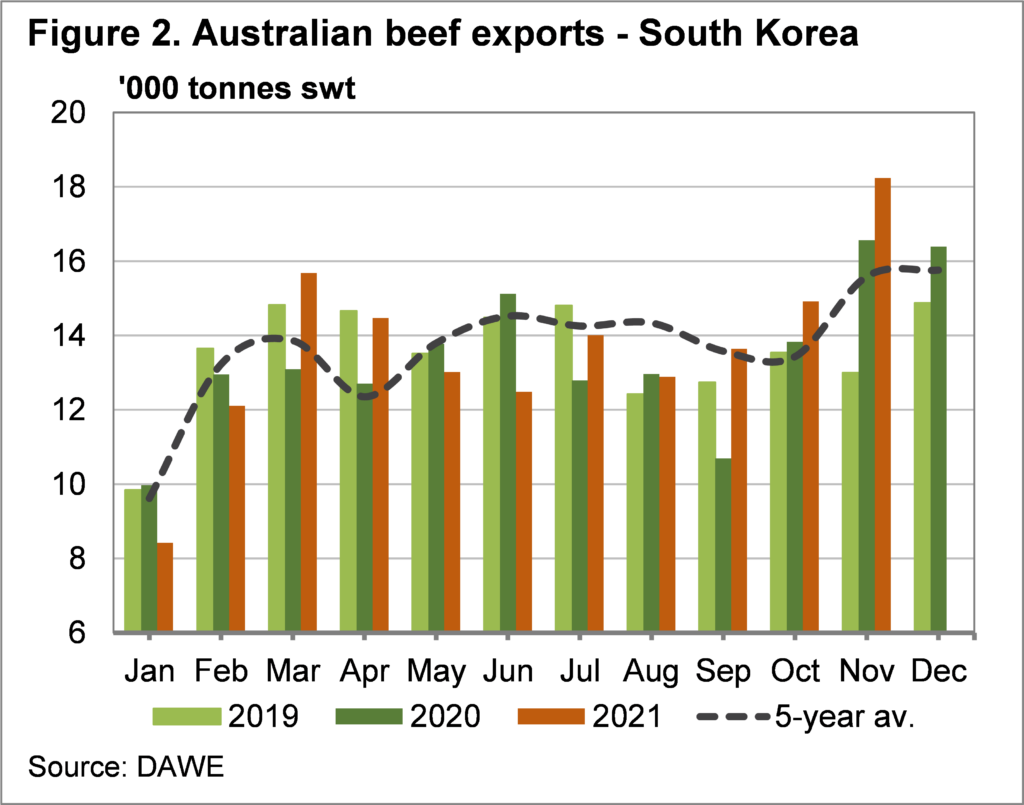