Following on from last week’s article, this week still has a distinct soybean ‘flavour’ to it. The market collectively held its breath for the release of the February WASDE report. The fact the reports production numbers were well inside analysts estimates proved to be something of a let down. The interesting thing about this is that normally, a WASDE/USDA report meeting trade estimates, would see a broad sell off - buy the rumour, sell the fact. However, this time around, the market seemed to ignore the USDA numbers and continued to rise. Perhaps the algorithm’s are developing a level of cognitive ability?

In summary, wheat was a non-event.  US production unchanged, global consumption up fractionally, global exports up 2.3mmt, global ending stocks down 1.7mmt.  This leaves global (excl China) ending stocks at 12.75% stocks:use, down from 13.1% in January.

Corn similarly was also relatively uninspired.  US production, exports and consumption all unchanged.  Brazil’s output cut by 1mmt, but with the second corn crop (safrinhá) going in the ground now, there is still plenty of time.

Soybeans were perhaps the biggest mover.  USDA cut Brazil’s production by a sizeable 5mmt to 134mmt down from 139mmt in January.  This follows a cut of 5mmt in the previous month. Total global supply cut by 8.7mmt, including cuts to Argentina and Paraguay.   Most of the market participants seemed to brush this off.  It is a given that the USDA tends to be conservative, so most of the market believe that more cuts are coming.

Enter CONAB.  The Brazilian national analyst and forecaster released their estimates for corn and bean production 24 hours after the WASDE report. This was the report that the market was waiting for.  Sometimes you have to trust the boots on the ground but the scale of the cut took a lot of people by surprise.  Brazils soybean production cut by 15mmt to 125mmt and well below last years 138mmt.  Exports were similarly slashed with ending stocks about half of what they were last year.

It will be interesting to watch beans over the next month.  Current Brazilian exports and shipping pace are on par with average where harvest in the North has been relatively smooth and yields at or above average.  However what happens to export volumes in the second half of the shipping program when supplies start to come in from the drought affected Southern regions?  It is assumed that the US will pick up export demand as South American supplies tighten, but this is not showing up on the USDA’s trade estimates yet.

Wheat is slowing floating around on the tide of South American crops.  We are still 4-6 weeks away from the Northern Hemisphere weather market and will likely not have any real direction until we can assess Spring weather and the condition of the crops then.  There are a couple of concerns – a dry US Plains and Canada – but equally, the crops throughout the Black Sea regions and Europe appear to be in very good condition.

The bottom line is that global demand remains strong, stocks are tightening and weather risks / geo-political risks remain elevated.  The Ag commodity markets look set to remain extremely volatile in the coming months.   While prices are at elevated levels, the market bias remains to the upside. 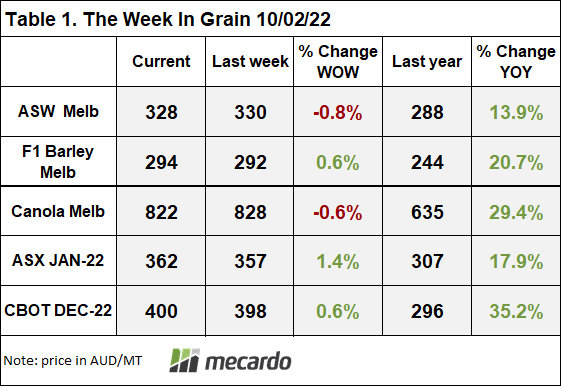