The ebb and flow of managed money’s interest in agricultural commodities has the ability to strongly influence the market. Speculators have steadily wound back their bullish bets on grains in the international markets over the last two months, adding momentum to the downward price spiral.

Managed money’s long position in SRW wheat now stands at only 58K contracts – 40% below where it was two months ago. In addition, the net long position that existed in May has slipped backwards into a short position of 6K contracts as of the last data released on the 12th of July.

Overall, in the space of two months, the view of managed money on CBOT wheat has shifted from being strongly bullish, to a bearish bet that prices could fall further.

US Kansas HRW wheat also lost favour among the money managers, and while net holdings have remained long, at 16K contracts presently, the position has fallen 66% from its most recent high of 47k contracts. (figure 2)

US Corn futures have followed the same route, with the managed money long position almost halving from 386K contracts in mid-May, falling to its present level of 227K contracts. On a net exposure basis, the net long position in corn has fallen 60% from its height of 379k contract in late April, to 151k presently. (figure 3)

Due to recessionary fears, the predominant sentiment in financial markets have taken a distinctly “risk off” mood. Not only has the flow of money into commodities dried up, but capital is being pulled out to be parked in safer, less risky assets.

As falls in the price of wheat and corn occurred from re-evaluation of the impact from the war in Ukraine, the reduction in managed money interest accelerated the selloff.

Recession is gauged to have a significant impact upon agricultural commodities, particularly corn and oilseeds due to the sheer size of the global demand profile that is taken up by industrial uses such as fuels like biodiesel and ethanol. Other grains like wheat have been dragged down in the process, partially on the assumption that greater availability of corn and oilseeds will result in lower demand for wheat due to substitution in the feed market, among other factors.

The pullback of funds from managed money from commodities such as wheat and corn has exacerbated the decline in price we have seen since peaks were reached almost two months ago. The small net short position now observable in SRW wheat indicates that the “smart money” has, on the balance, severely reduced its exposure to the market, and is relatively bearish on its future. 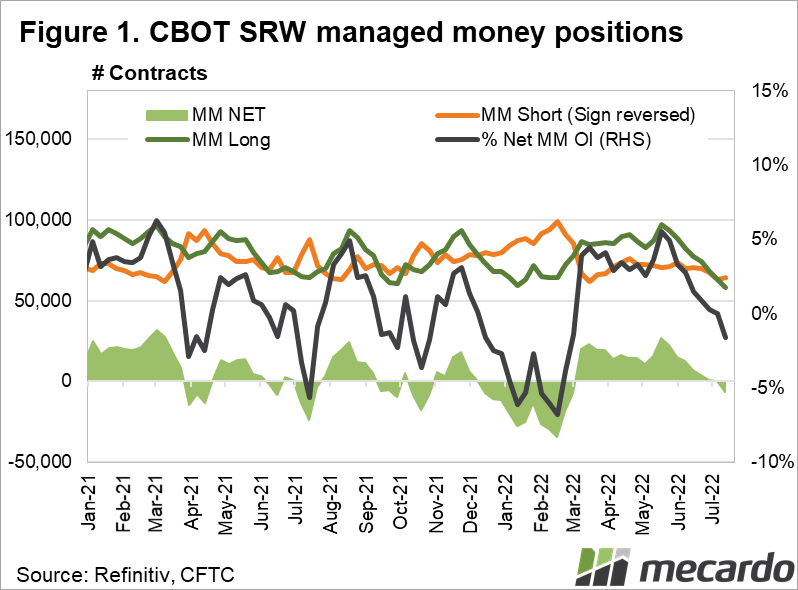 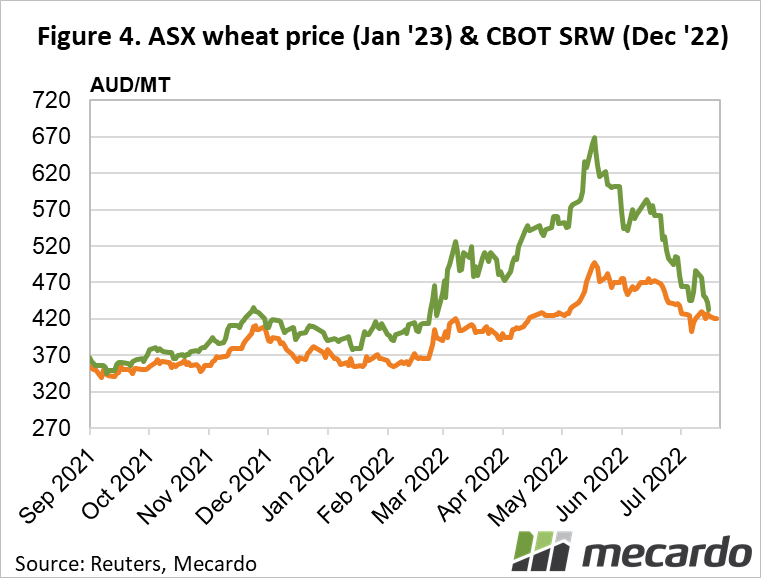