Speculators start running for the exits

Has sentiment among US “smart money” traders suddenly turned bearish against wheat after the buying-spree seen a month ago? The Net position of CBOT Managed Money traders in SRW wheat has fallen 13% in a single week, bringing their proportion of open interest in the market down to 5.5%. The speculators are starting to sell out, potentially exacerbating a recent downward trend in wheat markets, which have plunged over 3% since the start of March, driven by cumulative global news of improved cropping conditions.

The latest Commitments of Traders report has shown that the speculative managed money trader position in SRW wheat has sharply dipped by 4,227 contracts, or 13%; driven primarily by a closeout of 6,897 long contracts, or 7% of total long positions held by managed money. HRW wheat was a similar story, with Managed money positions dropping 4,060 contracts, or 8% from the week prior.

This change in position reduced the representation of “smart money” within CBOT SRW and HRW respectively to 5.5% and 20.44%.

In late February, SRW wheat rapidly found favour among managed money, with their net positions spiking from 3.79% of open interest to 6.23% by the start of March, beginning to reach towards the high level of market saturation that was prevalent in October 2020, where it peaked at over 8%.

Speculative trader interest in HRW wheat has, in contrast, taken a steady nosedive since the end of January, when it hit a 12-month high of 60,239 contracts net long, and 25% of open interest, but has since slipped 20% to 47,664 contracts, and only 20.44% of open interest presently.

Changes in the contract positions of speculative managed money traders in wheat generally move in the same direction as the price of wheat. When prices are falling, speculators tend to be selling out, and when the market is rising, they are typically buying up (figure 4).  When Managed money contract positions are at levels in the top 20% of the last decade, like they are now, over 70% of the time, they are on the right side of the market.  As such, it can be said that they both follow the market trends and, because of their influential size, can amplify them, turning a trickle into a torrent, or a mild rise into a substantial spike; which is why monitoring their behaviour is important.

What could be driving this exodus of speculative money by hedge and fund managers and their ilk?

Something to consider is that there has been a slew of news lately that is positive for crop volumes across key areas of the globe, and negative for prices.  Rainfall forecasts in the US hard red winter wheat regions of the US plains are expected to bring relief to parched crops during the critical spring growth phase, and snowfall in the US Midwest will provide much-needed moisture. Add to this Australia’s strong soil moisture outlook, plus good conditions in Russia and the EU, and the scene is set for a solid production across the world, putting a dampener on bullish sentiment.

The level of the positions held by speculative managed money traders, and any trends toward accumulation or unwinding, are something to watch because their sheer size has the potential to move the market. Managed money is typically on the right side of market movements, with increases in contract positions associated with price increases in the wheat market, and similarly, decreases in net positions, often associated with decreases in wheat prices. An accumulation of recent bearish news such as good moisture levels in the US, Russia, and Australia may have soured the previously more upbeat price outlook in the market. 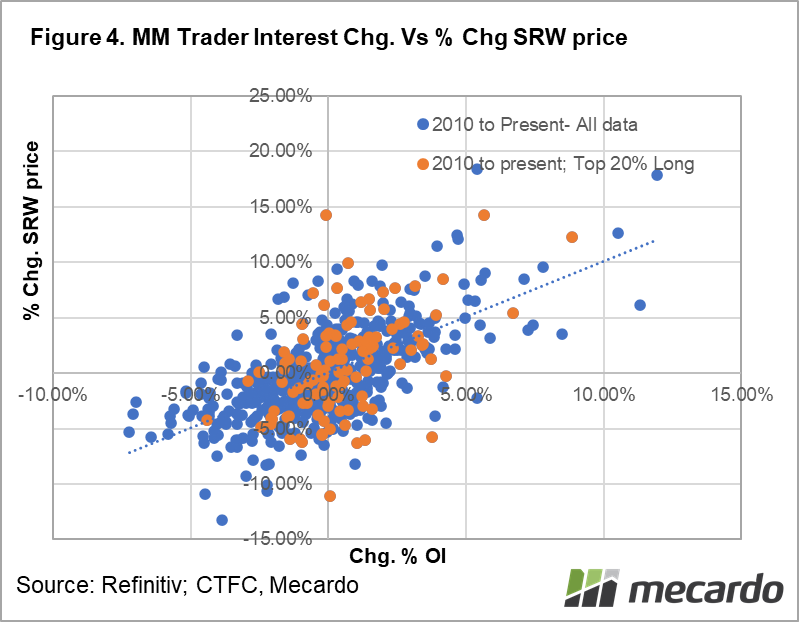