The rise and rise of young cattle prices hasn’t been matched in it’s most recent push by increasing grainfed cattle prices. While grain prices have been relatively steady, it is the rising cost of feeders which is likely to come to a halt as lotfeeders feel the pinch.

There have been plenty of reports citing lotfeeders as being behind the increasing Eastern Young Cattle Indicator (EYCI) and young cattle prices in general.  While grassfed cattle in saleyards have also had a price lift, quotes for grainfed cattle sold overhooks have been relatively steady for the last three months.  As a result, margins for lotfeeders look like they have been squeezed.

Figure 1 shows an estimate of input costs to produce a 100-day steer in feedlots on the Darling Downs.  There are plenty of variables in the input cost, but the main ones are the price of feeder cattle, and the price of grain.  Feed grain prices have fluctuated a little in recent months, but are still quoted at around the $320/t mark.

It has been the price of feeders which has rallied, and increased input costs to a new record.  Export feeder prices have been quoted as high as 620¢/kg lwt in Southern Queensland, which puts a 450kg steer at $2,790 per head.  In figure 1 we used 600¢ as the latest feeder price.

The sell price of grainfed cattle appears to have remained steady around 840¢/kg cwt.  So a 320kg cwt makes $2,856/head.  Needless to say that after putting feed into cattle lotfeeders are losing over $100/head (figure 3).

Things aren’t as bad for lotfeeders in the south, with feeders a little cheaper at 580¢/kg lwt, and feed grain costing just under $300/t (figure 2).  The estimated margin for southern lotfeeders is slightly negative.

The actual cost of grain for lotfeeders is relatively cheap, and as such there might be cattle putting more weight on in feedlots to make up for the very expensive buy in price.

When lotfeeders margins go negative it obviously means they will be unwilling to push feeder prices any higher, without some sort of lift in the grainfed cattle price.  We can see in figures 1 and 2 that we did see that back in May and June when the grainfed steer price jumped higher, but feeder values eventually caught up. It is hard to envisage another lift in finished cattle prices but we said that in May too. 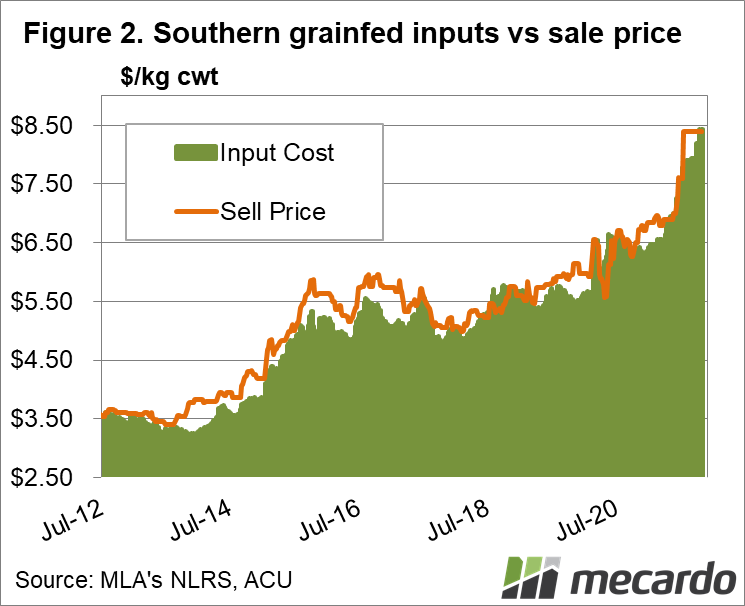