In a recent report, G. Schneider commented on the increase in staple length of the Merino clip this season, beyond levels that suit European processors. Mecardo takes a look at staple length in the Australian Merino clip in this article

There is a range of staple lengths (a distribution) in the Australian Merino clip which is sold to the supply chain for a range of end uses.  As wool is a natural commodity with all the variability around longer term average specifications this entails, processor machinery is set to match the average distributions inherent in raw wool in terms of fibre diameter, staple length, staple strength, vegetable matter and so on. So when the distribution for a particular attribute varies from its normal range, such as fibre diameter, there will be a supply shortage on one side of the distribution and an excess on the other.

Schneider commented recently in a report (view here) that the merino clip was appreciably longer this season, which presents a problem for them as they do not prefer long staple length wool. Figure 1 shows the staple fibre length distribution for merino wool sold in the December to February period during this season and the two preceding seasons. For the merino clip as a whole 95 mm (90-100 mm) is the largest category, accounting for 23-24% of the sales volume in clean terms. Note how the proportion of 65-85 mm wool fell noticeably in 2020-21 and stayed low in 2021-22 compared to 2019-20. At the same time, the proportion of 105 mm and longer rose substantially.

The change from early 2002 to 2021 in Figure 1 is explained by the change from drought to good seasonal conditions in a lot of the eastern wool growing regions, with continued good conditions in many areas in 2021-2, a marked improvement in Western Australia and of course ongoing issues with getting sheep shorn maintaining the distribution this season. This is the change that G. Schneider was commenting on, although their focus is on the finer side of 19 micron rather than the whole clip.

How do these changes look by micron category and through time? Figure 2 shows the proportion of combing length wool which had a staple length of 106-125 mm long wool for the December to February period, by season from the mid-1990s, for 17 and 18 micron. While the proportions remain low, the proportion of 18 micron wool which is 110-120 mm long has tripled in the past two seasons. There has been an increase in 110-120 mm long 17 micron but nowhere near as dramatic.

Figure 3 repeats the exercise for 19 to 21 micron merino combing wool. For these micron categories, the proportion of over length wool has basically doubled in the past two seasons.

This brief look at staple length confirms the comments by G. Schneider. Mecardo will look for a price effect from this change in staple length supply next week.

Increased year on year supply generally means downward pressure on price, which should translate into larger discounts for over length merino wool. By the same logic, shorter length combing wool should have reduced discounts (although the discounts are already very small) due to a lower relative supply. 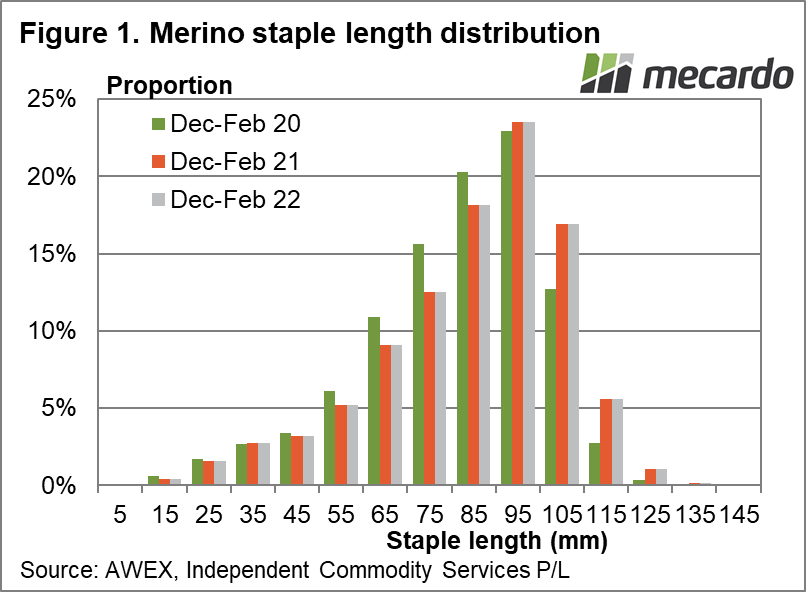 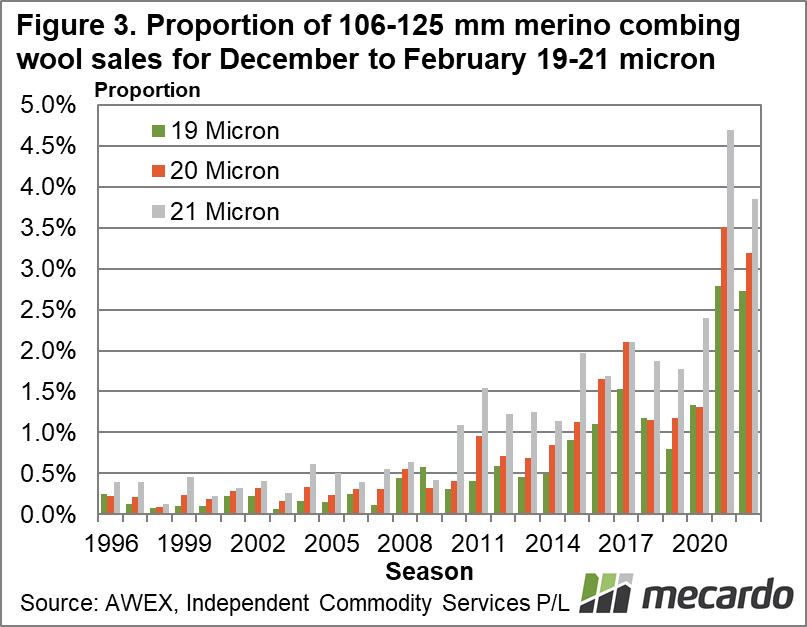