Earlier this week Mecardo showed how staple strength was having little effect on the price of merino fleece, discounts and premiums are minimal even for the fine merino categories. This article provides some percentile analysis for low staple strength discounts from the past decade.

Mecardo has discussed the changing structure of premiums and discounts for staple length and strength in the past over the past two to three decades. Figure 1 is a refresher on the change in discounts for low staple strength (in this case under 20 N/ktx 70-85 mm long 17 micron fleece). The discount is to the price for fleece with staple strength of 35 N/ktx and runs from September 2000 to this month (to date). Twenty years ago low staple strength was punished with massive discounts in the order of 35% to 45% in fine merino fleece. The discounts trended lower from then to around 2015, and have been relatively stable since then with maximum levels around 10-12%.

Figure 2 looks at the discounts shown in Figure 1 for the past decade only. The choice of a decade of data is rather arbitrary, but it does cut off the huge discounts of twenty years ago which have not been operating in the market since 2009. Monthly average prices are used to calculate the discount so there will be some possible “noise” in the data, such as small premiums for the low strength wool which will be primarily a function of the timing of sales.

Figure 3 repeats the Figure 2 for 20 micron fleece, slightly longer at 90 mm. The picture for 20 micron is different. Discounts did seem to trend lower through to around 2015-2017 but have since widened back to levels consistent with a decade ago in the past couple of years. In effect there has been no consistent trend in the low staple strength discount for 20 micron merino fleece. Looking back to Figure 1, it appears the discount for low staple strength in 17 micron wool shrank until it reached a level similar to the 20 micron category.

Fine merino prices carry more risk of increased discounts for low staple strength than the broader merino categories. Keep this distinction in mind when considering holding greasy wool for stock, especially in a season when there is plenty of low strength wool being shorn. 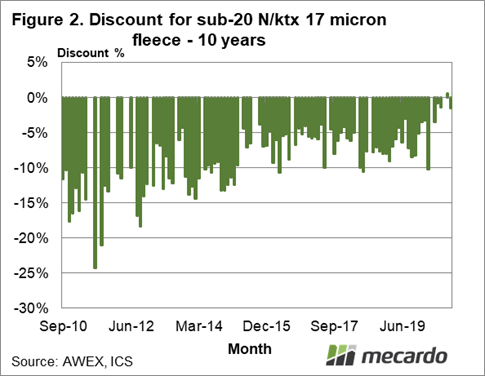 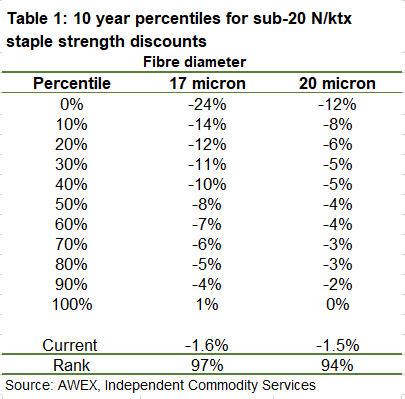