It was a steady but solid start to the selling week, however this soon changed as buyers became animated, bidding strongly across all categories. This initial positive market was nothing on what happened on Thursday, AWEX reported a “forceful opening” that saw immediate lifts in the merino fleece types, with clearance rates above 99%.

With Fremantle not participating last week, it played “catch-up” on day one this week, posting a lift of 58¢ for the WMI, along with a further 34¢ rise on Thursday to close up 92¢ for the week at 1,477¢.

The market is now seemingly on an upward push, which after the uncertainty of the past year is a remarkable feat, underlying that demand is returning stronger than we had before the pandemic disruption. To illustrate this strong rebound, the southern 16.5 MPG indicator, now sitting at 2,792¢, is the highest it has been since October 2018, when it was at 2,881¢.

The Crossbreds section was green across the board again, gaining between 6 & 25¢. Cardings followed the market up also, with prices improving 22¢ in Sydney, 17¢ in Melbourne and 39¢ in the West.

With Fremantle coming back on board this week there was a 16% increase in bales sold on last week. With another low pass in rate of 4.6%, 40,527 of the 42,496 bales on offer were sold, reflecting the strong demand in the market. This time last year just over 14,000 bales were sold, remembering this was right in the middle of the pandemic uncertainty, but still an impressive 186% rise, bringing the weekly clearance for the season to date, up to 34,258 bales.

This week on Mecardo, Andrew Woods looked at the change in the relationship between the average sale price and MPG for the medium and finer merino categories. It is a tidy demonstration of how discounts in the market have shrunk during the past two decades and means the AWEX MPGs are better as a guide to budgeting and pricing than they were.

With Fremantle having another break next week, just 34,600 bales are rostered with sales in Sydney & Melbourne on Tuesday & Wednesday. With low number of bales on offer and a rising market, we’re likely to another overall improvement in prices. 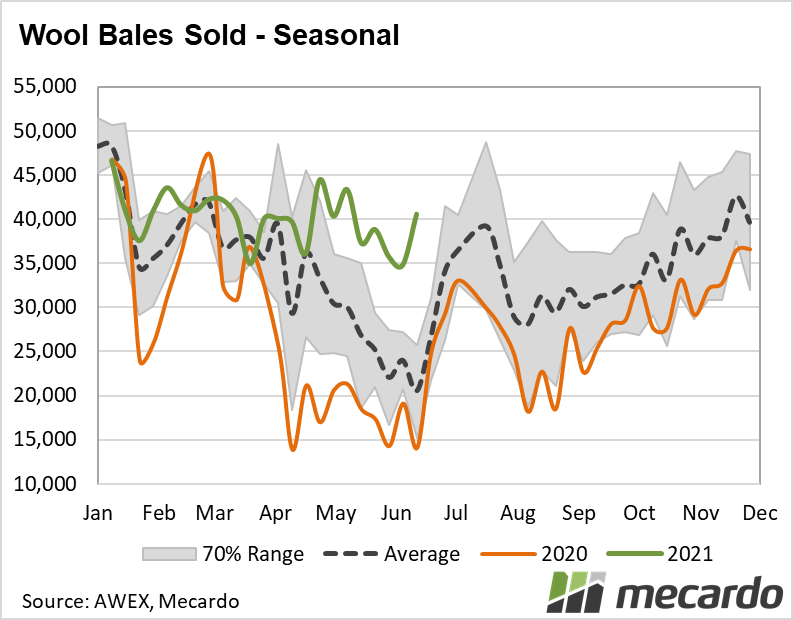